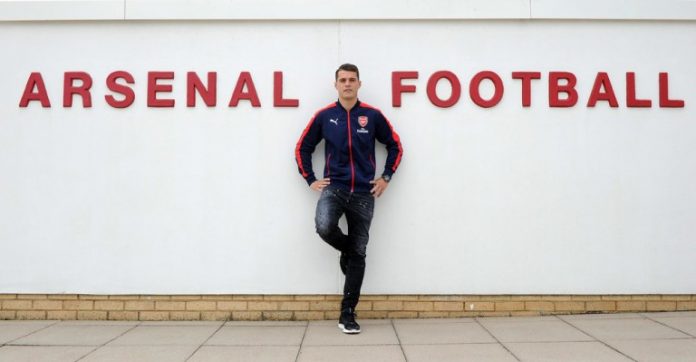 Over the 2015 summer transfer window, Arsenal was the only club in all of Europe’s top five leagues not to sign an outfield player, adding only veteran stopper Petr Čech to their squad. It will therefore come as a great relief to Arsenal supporters that Arsène Wenger has chosen to act early this time, with the €40 million transfer of Swiss midfielder Granit Xhaka being widely lauded as addressing one of Arsenal’s key deficiencies – namely a lack of midfield bite.

Despite this pro-active behaviour, regular followers of “Arsenal Bingo” can expect to mark off a common call in the not so distant future. For even before the club crash out of the Champions League at the round of 16 stage or St. Totteringham’s Day, there will be the inevitable cries from certain heads in the media to “sign a striker”. Wenger has the money, so the argument goes, therefore there’s no excuse not to splash £100 million on a guaranteed goal scorer that will grab the vital twenty-or-more goals a season to push Arsenal to the title. This has been a recurring event, sporadically since the days of Thierry Henry’s departure and regularly since the transfer of Robin van Persie.

This rhetoric casts Wenger in the role of stubborn footballing misanthrope, who’s somehow principled against signing a world-class striker for his own selfish reasons. It also fundamentally misrepresents the uncertain nature of football. Of this year’s top five Premier League scorers, one was signed from a Conference Premier side, one had been with his club since the age of 11, one was a Chelsea cast-off (albeit a relatively expensive one) and one hadn’t previously played at a higher level than the French second tier. Only Sergio Agüero could lay claim to having been an established player in a top league before his transfer and even then he’d scored a relatively sedate 75 goals in 149 league starts for Atlético Madrid, only registering a first career hat-trick in his final ever game for Los Colchoneros.

Anyone can look at Lionel Messi or Cristiano Ronaldo and declare with great confidence that they have an established goal scorer on their hands. But these are exactly the kinds of player who can’t be bought and after that it gets much trickier. Different players suit different systems and have different development curves. The Leicester scout who recommended signing Jamie Vardy would be lying if they told you now that they knew they were looking at a Premier League top scorer then, or for a more Arsenal-specific example, Thierry Henry had scored only 23 goals in his first four seasons as a professional at Monaco and Juventus before his move to the Gunners.

With their increasing financial clout, some clubs have attempted to get round this by seemingly buying up as many players as they can get their hands on. Chelsea are the prime example here – in January 2016, the Telegraph reported that the club had 28 players, worth over £150 million, out on loan. But it’s difficult to argue that Chelsea’s transfer policy is more successful than Arsenal’s. The Blues have signed few recognizable long-term stars, have only one top-class striker, Diego Costa, in their squad and have still failed to spot the talent in some of the players they signed – witness Kevin De Bruyne’s impact at Manchester City having made just three Chelsea appearances previously, or Nemanja Matic being bought back to the club for £21 million after being let go three years earlier.

So unfortunately for Arsène Wenger and his detractors, there is no £100 million magic solution to his supposed striker problem. The next top goal scorer could be hiding in Fleetwood, Le Havre or Arsenal’s own academy. As more money has become available to clubs to spend on transfers, there’s been a shift away from the player development model to one of the quick-fix instant impact solution. But there’s no significant proof that this is the way forward. Maybe clubs should do away with the idea of scouts and transfer targets, and just stick a pin in a list of players and sign whoever it lands on. History suggests that some of them might do better that way.