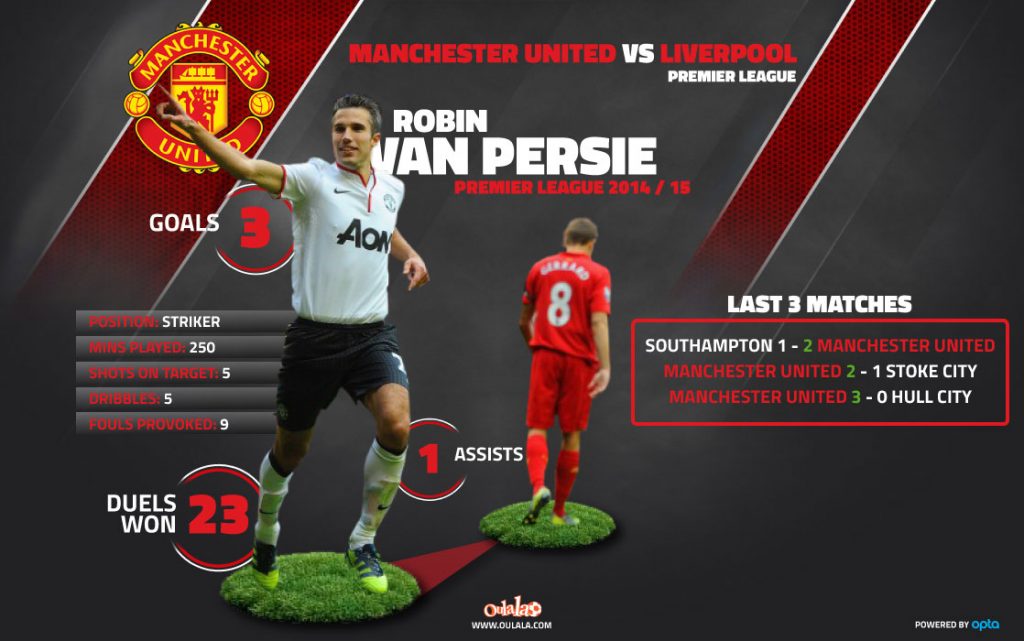 This week Robin van Persie fired a warning to rivals Liverpool ahead of Sunday’s showdown saying he is now hitting top form ahead of the Reds visit to Old Trafford and the stats fully support his claim.

After Manchester United manager Louis van Gaal openly criticised the striker, van Persie has since scored three goals in his last three games. On the back of his excellent brace away to Southampton it appears he is back to his best. The recent win propelled United up to third in the league and the club are now on a run of five successive victories and are high on confidence.

The stats provided by Opta powered fantasy football game www.oulala.com highlight the impact that van Persie has had for United in their last three fixtures against Southampton, Stoke and Hull. The Dutchman completed 70 minutes against Hull before two full 90 minute appearances against Stoke and Southampton emphasising that the 31-year-old has now returned to full fitness.

In his 250 minutes of action over the last three games van Persie has netted 3 goals from 5 shots on target and also provided the assist for Wayne Rooney’s first half goal in United’s 3-0 win over Hull. The striker has also completed 5 successful dribbles and has been fouled a total of 9 times. Additionally, he has won 23 head to head battles, a 56% success rate.

Van Persie struggled with form at the beginning of the season but believes he is now past that and ready to shine. On his recent performances, van Persie said “I’ve been felling very well over the last couple of weeks. Physically I can make my runs over and over again. I can play 90 minutes easy. The goals, assists, wins will come.” And in regards to Sunday’s showdown the striker said “The next game is Liverpool, so we’re looking forward to that . We have to keep the momentum going.”

The stuttering Liverpool side that were knocked out of the Champions League on Tuesday go to Old Trafford to face a Manchester United team that is enjoying an excellent run of form.

Van Persie has faced Liverpool 15 times during his career which has included 6 wins, 4 draws and 5 losses. 12 of those appearances came in the Premier League, in which, he scored all his 6 goals against the Reds.