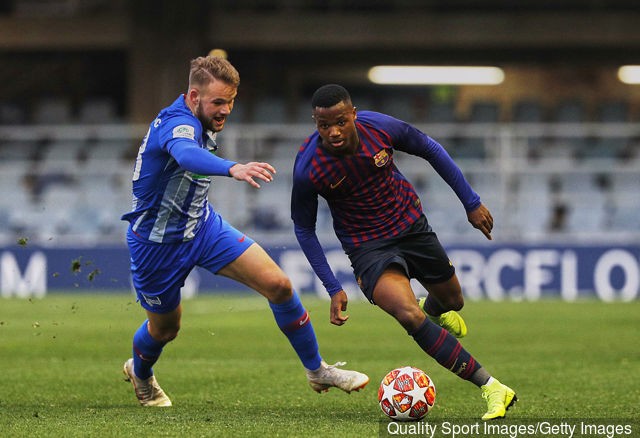 According to Daily Record, Manchester United are keen on Barcelona youth player Ansu Fati, but they face competition from Newcastle United, AS Monaco, Borussia Dortmund and Nice.

The 16-year-old, once on the radar of Manchester City manager Pep Guardiola, emerged as the highest goalscorer of the Barcelona youth side that reached the semi-final of last season’s UEFA Youth League, but he could yet leave the Catalan outfit as is currently out of contract.

The financial terms and development pathway offered by Barcelona aren’t pleasing to the teenager and his father, and United are monitoring the situation and looking to take advantage.

The Red Devils are keen on improving recruitment at youth level, and have identified Fati as a player capable of becoming a star at Old Trafford in the near future.

The Guinea-Bissau-born forward scored 15 goals in 26 starts during the last domestic campaign and was key to Barcelona UEFA Youth League campaign, starting their last six games and scoring four times – including both goals in the 2-2 semi-final against Chelsea.

United boss Ole Gunnar Solskjaer has shown he isn’t afraid to trust youth after featuring 17-year-old Mason Greenwood and 19-year-old Tahith Chong in the second-leg of last season’s Champions League last-16 clash against Paris Saint-Germain, and Fati could fancy his chances of a quicker pathway to first-team football available at the Theater of Dreams.