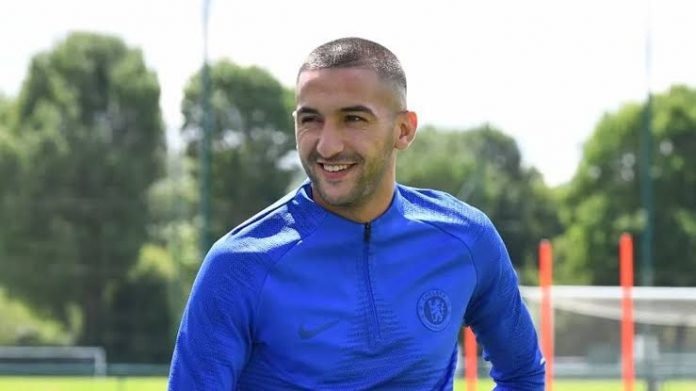 According to The Athletic reporter Simon Johnson, the new summer signing Hakim Ziyech could make his Chelsea debut when the Blues host Southampton in the Premier League this Saturday.

The 27-year-old, who joined the Blues from Ajax in the summer as part of a deal that was agreed at the turn of the new year, is yet to feature for Chelsea after picking up an injury during pre-season. But it is believed that the Moroccan international is now approaching full fitness for the West London side.

Ziyech, however, has been gradually settling into life at Stamford Bridge.

Frank Lampard’s side will get back to Premier League action this weekend as they host Southampton at Stamford Bridge and the Blues will look to make it back to back wins for the first time this season.

Johnson, Chelsea correspondent for The Athletic, suggests that Ziyech could finally be in line to make his first appearance for the Blues this weekend, although most likely as a substitute.

Sharing this on The Athletic’s Real Time Section, Johnson said: “A real possibility he (Ziyech) makes his competitive debut (against Southampton), albeit probably from the bench”.

The 27-year-old attacking midfielder was announced in February to have signed a five-year contract with the club for £33.3m.

Following their impressive 4-0 win over Crystal Palace before heading into the international break, the Blues will be favourites to win the clash against the Saints.

Frank Lampard’s side have recorded two wins and one draw out of their opening four games in the Premier League this season, leaving them with seven points to their name and ranked seventh in the standings.

The Blues will kick off their Champions League campaign with their group-stage opener against Europa League champions Sevilla at Stamford Bridge on Tuesday, October 20.