Oft accused of play-acting and theatrics, Real Madrid appeared to fall a long way short of their own ‘high’ standards against Ajax last night. For once, Cristiano Ronaldo was not at the heart of the action, instead, the central characters were Sergio Ramos and Xabi Alonso, both of whom managed to pick up red cards in the dying stages of the match for time-wasting. Under normal circumstances one might lambast the pair for their sheer stupidity, especially considering Madrid were 4-0 up already, but, funnily enough, these were not normal circumstances.

Due to the red cards both Ramos and Alonso received last night, they will serve a suspension for the final group match against Auxerre – a game that is meaningless to Madrid as they are already assured of top spot in the group. Hence, there are strong accusations that the pair were instructed to be sent-off last night, so they will now be ready to return for the knock-out stages without a suspension hanging over them. Whether this is true or not, the fact that both were booked for time-wasting while leading 4-0 and the ‘coincidence’ that Ramos was taking goal-kicks towards the end of the match – allowing him the opportunity to be easily booked – suggests there have might have been some pre-planning.

Is there a problem if it was all planned though? After all, they were simply using the laws of the game for their own ends, and did so without hurting anyone as they were booked for time-wasting rather than elbowing an opponent in the face. The pair have denied that it was deliberate, but even if they suggested it was, would UEFA would able to do anything? The suspension laws and the time-wasting laws were established to punish players, and Madrid, Ramos and Alonso will be duly punished, as the players will be suspended for the next match. The blame, if there is indeed any blame, surely lies with the whole set-up of the competition and the process of carrying yellow cards to the next round – allowing teams to manipulate the system, especially if they have qualified with two games left to play.

This is not the first time that this has happened to a team managed by Jose Mourinho though. When the Portuguese coach was with Chelsea there were similar accusations that players got themselves booked deliberately – accusations that were later confirmed by Didier Drogba.

“Mourinho calculated everything – he looked at the match programme and analysed the cards each of his lads had received,” Drogba told the News of the World.
“He sometimes whispered to me: ‘It would be good for you to get a yellow card today. You would miss such-and-such a match. I will give you four free days.’ No problem. I used to do as he said.”

While this manipulation of the system is not illegal, nor can it be classed as cheating, it has proved to be controversial, simply because Mourinho and his teams seem to go about it in the least subtle of ways. The time-wasting scenarios last night might not have been hurtful to anyone but they were frustrating to watch and certainly seemed to irk a few of the Ajax players. It might well have left UEFA far from happy too, as they will surely not have enjoyed watching their rules be exploited so deliberately.

On the other hand though, Madrid were in such a dominant position, both in the match and the group itself, that they could do without Ramos and Alonso for the final few minutes and for the next game. They worked hard to get themselves in that position and perhaps having a full squad to choose from in the knock-out stages is simply a small reward for their effort. Whether right or wrong, one thing is for sure, Mourinho and Madrid still need to work on their acting and communication skills, as the pictures from the game last night show… 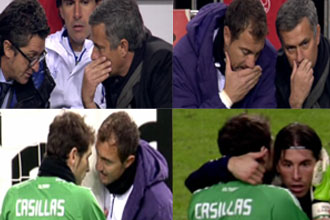