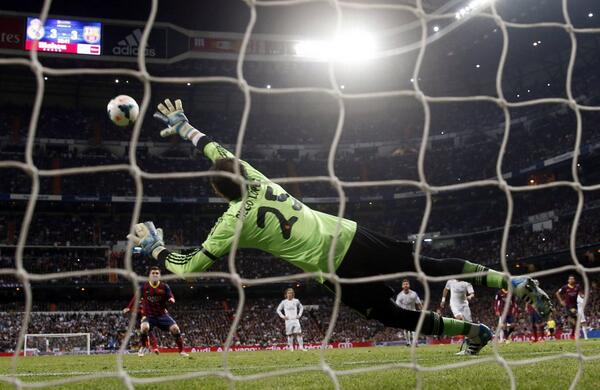 Lionel Messi scored a hat-trick in a seven goal thriller against 10-men Real Madrid to take Barcelona to within a point of the lead in La Liga, whilst breaking yet another record in the process. 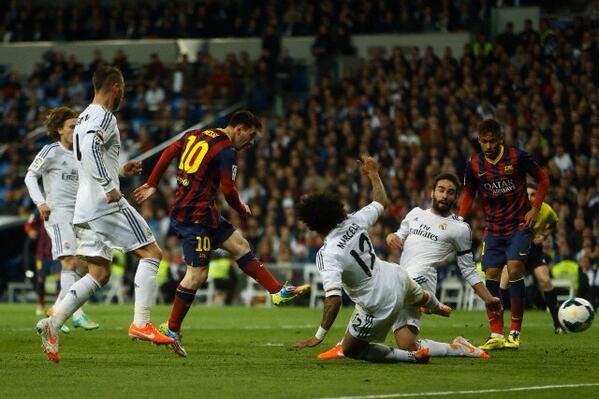 Going into the game, the hosts were slight favourites as they were unbeaten in 31 consecutive games; their last loss coming at the Nou Camp in a 2-1 defeat earlier in the season.

But it was Barca who took the lead within eight minutes through an accomplished finish by Andres Iniesta. The Spaniard exploited a gap left by Dani Carvajal on the wing and leapt onto a Messi pass, before smashing the ball into the net off the underside of the bar to stun the home side.

Four minutes later the duo combined again as Di Maria crossed for the Frenchman to control on his thigh and blast home to take the lead. He could’ve had a third moments later had it not been for a brilliant goal-line clearance from Gerard Pique.

Messi equalised three minutes before half-time as he picked up the ball in the box before quickly skipping away from two defenders to guide the ball past Diego Lopez.

The first of three on the night for the Argentine, it was enough to make him the all-time ‘El Clasico’ top scorer with 19 goals, surpassing Bernabeu legend Alfredo di Stefano.

Cristiano Ronaldo then slotted home from the spot ten minutes after the break to swing momentum in his sides favour once again.

But then came the turning point in the game as Sergio Ramos saw red ten minutes later in a clash with Neymar as he denied the young Brazilian a goal scoring opportunity. It was Ramos’ 19th red card in his nine years at the club; his third in the fixture and the 13th in the last 14 Clásicos.

Messi stepped up to slot home his second of the night, before bagging the winner from another spot-kick six minutes from time after Iniesta was brought down by Xabi Alonso in what seemed a soft decision.

The win was perhaps more crucial for the Catalans as loss would’ve seen them seven points behind their title rivals as well as the pressure that appears to be mounting on boss Tata Martino, but the victory takes them to within a solitary point of Real and Atletico with just nine games to go.