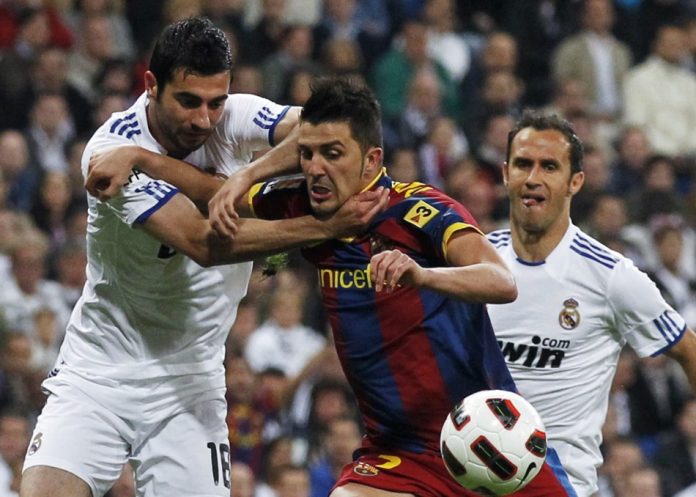 If Spanish football can offer a challenge greater than getting the ball back against Barcelona, it has to be knowing when Jose Mourinho is happy. Besides the occasional unravelling of the megalomaniacal pomp with which the Portuguese appears to douse press rooms and touchlines before his arrival – when, finally, we are allowed a little glimpse of what may or may not be the young man who so moribundly failed as a footballer relishing every second of being the greatest manager in the world – Mourinho’s amiable veneer of tortured esoterism cloaks any understanding of what’s really going on in the man’s head.

It would appear that the charming charade has again enveloped the Spanish press. In the wake of the 1-1 draw between Real Madrid and Barcelona, at the Bernabeu, the tactician treated fans to his usual array of bitter complaints as he carefully tended to the garden of an almost universal belief that the real significance of what went on out on the pitch was that Barcelona had just nabbed the title on Real’s own turf.

Such a belief cannot be further from the truth. Yes, the result is a negative one for Real, who will certainly have wanted revenge for the 5-0 drubbing at the Camp Nou earlier in the year; yet it’s important to remember that this Barcelona is not going to drop too many points this year – in fact, it’s unlikely that they will drop any. In short, the title was over for Madrid before the match even kicked off – as Mourinho admitted himself.

The truth is that behind the charade, Mourinho will be delighted with the manner in which his ten men wrested a draw from the teeth of ignominious defeat. Barcelona, for once, stuttered. Madrid teams in times gone by would all too often have folded, even at home; but Mourinho’s Madrid, in the shadow of their illustrious rivals, are quietly, gradually, building into a fearsome attacking machine in their own right – and one which simply does not give up.

Indeed, for all that has been made of Cristiano Ronaldo’s supposedly infantile attitude compared with the impeccable behaviour of Lionel Messi, it is worthwhile noting that soon after Ronaldo cooly dispatched the equaliser from the penalty spot, Messi took a ball out of play and thwacked it deliberately and viciously into the Madrid cowd before turning and unfolding a look of sheer disbelief as the referee gave him a telling off. Barcelona were rocked by Madrid’s revival.

That is not to say that Barcelona couldn’t have won the game themselves. After Raul Albiol was dismissed, Mourinho shifted Sergio Ramos to the centre of defence so that he could shift Pepe into midfield in order to press Barca’s midfield with the Portugal international’s bite and pace; the flipside was that David Villa had the entire flank to play with; Messi was able to find him in space on several occasions and it frequently took last-ditch methods from Madrid’s defenders and some quick charges from goalkeeper Iker Casillas to keep the Catalans at bay.

But make no mistake, Real Madrid’s reaction was that of winners. Mesut Ozil, whose easily tiring legs Mourinho clearly wanted to spare for the more important Champions’ League ties – came on and injected both urgency and balance into Madrid’s already pacey attack; Ronaldo was surprisingly unselfish on the ball and Emmanuel Adebayor held the ball up well against Barca’s centre-backs. Barcelona were not able to see out the game as comfortably as they are often able to, even against top sides; Real have been stung and, though they can now completely forget about La Liga, they suddenly look like they could well beat Barcelona for the first time this season – and where it counts the most.