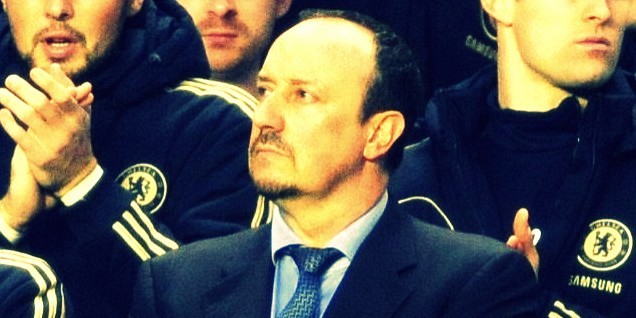 Churchill famously didn’t say once. He may not have come up with that quote but it’s still a very accurate description of Chelsea fans tomorrow.

Their team are Champions of Europe as they’re fond of chanting approximately every 13 seconds, FA Cup holders, third in the Premier League and have played some of the best football in Europe at times this season, with Oscar and Eden Hazard settling in exceptionally well and Juan Mata producing the goods more often than a prolific drug dealer.

But there’s unrest, unhappiness and seeming widespread loathing and possibly even hatred of their (interim) manager. Rafael Benitez, the newly appointed manager has so far bored the viewing public into varying states of stupor with two soporific 0-0 draws under his rule and currently couldn’t be less popular with Chelsea fans if he urinated in the Stamford Bridge centre circle.

Bitterness at the brutal sacking of ex player and Champions League winning manager Roberto Di Matteo was to be expected. But the vitriolic attacks on Benitez from Chelsea fans have surprised people with its ferocity. While few leaders are popular, even fewer leaders are roundly booed by the baying public and attract pathetic slogans written by fully grown adults on bits of A4 paper.

In many ways this is understandable. Di Matteo was not only a seemingly amiable, pleasant man but a key player in the late 90s Chelsea side that won at home and in Europe, and also the man who helped deliver to Chelsea what they had long dreamed of – finishing 6th in the Premier League. Oh, and the Champions League trophy.

If Di Matteo represents Chelsea, Benitez represents the Anti-Chelsea. His Liverpool side beat Chelsea in two European cup semi-finals and while Benitez’s attacks on Chelsea fans weren’t so much attacks as whiny little bitch slaps that attracted laughter rather than anger, they’re not going to help the current healing process.

While Chelsea fans being so apparently miserable when they had such good times only a few months ago may grate with fans of other clubs, they’re perfectly entitled to express their displeasure. Journalists and ex-players telling the fans to ‘get behind the manager’ have no idea what they’re talking about.

Fans, however controversial or disagreeable their opinions have every right to air their views providing they’re not in any way offensive or discriminatory, given the amount they pay for tickets and the amount of influence they wield at a club. Criticism of the fans for protesting the appointment of an interim manager isn’t merited.

Also journalists who last season attacked Blackburn Rovers fans for not supporting Steve Kean and have been less critical of Chelsea fans have questions to answer.

While the fans are entitled to dislike Benitez, the criticism of him from other quarters as a poor manager who’s never been particularly successful is completely misplaced. His CV is superb. Two league titles with Valencia against the might of Barcelona and Real Madrid is particularly impressive.

While Barcelona were desperately struggling at the time, Real Madrid were at the peak of their infatuation with Galacticos. For Valencia to twice in three years beat them to league titles is a mighty achievement.

He topped that achievement with what he achieved at Liverpool. Winning the Champions League with Djimi Traore at left back was an incredible feat that required tactical nous of the highest level, at least until the final when tactics were chucked into the dustbin in a wave of wonderfully classy attacking play from Milan and frenetic, not so classy yet still effective forays forward from Liverpool.

But the 0-0 draw in Turin against Juventus without Steven Gerrard and the victory over two legs against an all-round better side in Jose Mourinho’s Chelsea were almost as miraculous as the comeback from 3-0 down in Istanbul.

But in that time the Premier League was dominated by Mourinho’s Chelsea and the Rooney–Ronaldo–Tevez Manchester United side, two great teams who would win the League today at a canter. The side Benitez built that gave ran United very close in 2008-09 was an excellent side with Xabi Alonso, Javier Mascherano and Gerrard forming the best midfield in the League.

To dismiss Benitez as the crank with a funny beard who reeled off a load of statistics off a piece of paper at a press conference is silly. He’s an excellent coach with a super track record. He failed at Inter Milan, but few managers do succeed with aging sides that over-achieved massively under the previous manager.

As good a coach as Benitez is, it’s debateable as to whether it will work out at Chelsea for him. The fans and you’d guess many of the players’ hearts are still with his predecessor. Like a new boy band member replacing the previous heart-throb, it’s going to take a long time to sew together broken hearts.

That’s if he gets that time. Roman Abramovich isn’t so much impatient as impetuous and has no qualms about sacking managers, however much they’re being paid, however long their contract is.

Benitez being an ‘interim manager’ at least means he won’t cost much to pay off should he be ditched, while criticism of him being an interim manager is forgetting the fact all Chelsea managers are basically interim appointments.

No manager lasts long in the Stamford Bridge dugout.