Angel di Maria saga is taking all sorts of nasty twists and turns. And we must say, newspapers in Spain are probably getting it all wrong. The situation as we understand is simple. Well, not that simple. 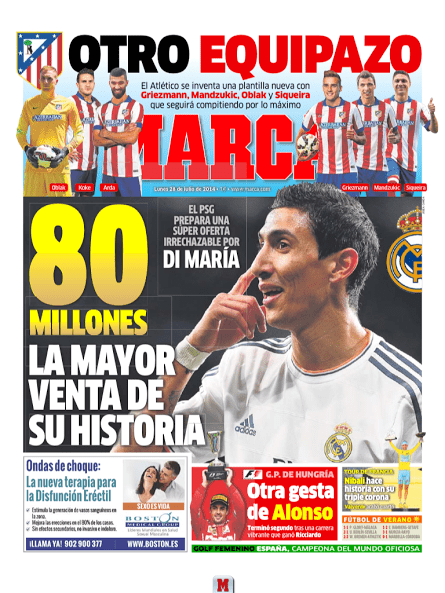 Now, Marca reporting today that PSG are hell-bent in signing Angel di Maria and could be willing to offer up to €80m to secure his signature. Di Maria’s potential sale would break Real Madrid’s highest sale record; however, coach Carlo Ancelotti wants to keep the Argentine in the squad but the club and player have different ideas.

Ancelotti says all he knows is that, like every other player, Di Maria must present himself at Madrid’s training ground on August 5, and he considers him as key to his plans for next season.

Marca further claim, United have almost completed the signing of Cavani (what? are you kidding us?) which will give PSG the flexibility to sign Di Maria. Now, really we are getting sick of this saga!