We all know that Angel di Maria will be leaving Real Madrid in the summer. Let’s not go into the detailed transfer background again. You all know this. Don’t you? So, better get into the main story.

Spanish radio station Cadena Cope reported yesterday that Di Maria will decide his future shortly and will join either PSG or Manchester United. Today Spanish newspaper Marca claim that it is only a matter of days before Maria puts pen to paper at PSG. Madrid would ask a transfer fee of €65m while Di Maria will sign a 5-year contract earning €8m a year.

Catalan newspaper Sport however reporting on the same line as well (they may have taken the news from British tabloids), but they add Di Maria doesn’t want to stay at Madrid and that Louis Van Gaal has urged Manchester United to go for his signing if PSG fail to close the deal. 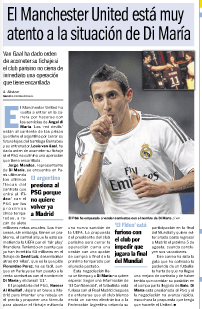 PSG are favourite to sign him but they need to sell one or two players to balance the books. United do not have this fear of breaking the FFP limits, but hard to see them splashing €65m on one single player.