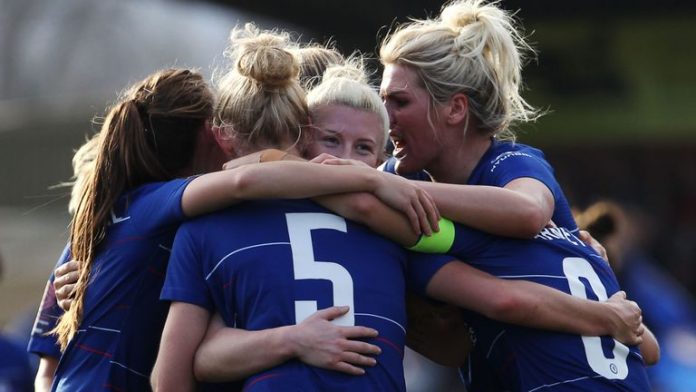 The announcement that women’s football has secured a major sponsorship deal is excellent news for a sport that still struggles to gain mainstream recognition.

Barclays’ decision to splash out £10 million to become the first title sponsor of the Women’s Super League for the next three years was heralded as a landmark moment by the Football Association’s Kelly Simmons.

Securing sponsorship for the WSL was among Simmons’ main priorities on assuming her role as the director of the women’s professional game back in September.

“It’s not just the investment, it’s the power and the reach of that brand can take women’s football to new audiences.

“Of course, we’ve got the World Cup (France 2019) – I think it’s probably going to be the biggest women’s team sport spectacle ever, globally and domestically.

“And then the GB Olympic team, all the spotlight will be on the Olympics – it will be a great opportunity if we can be part of that. And then Euros on home soil, which is incredible, in 2021.

“I think if an England team could win a major tournament it would definitely capture the imagination and attention of the nation. Those players will become household names and that will again transfer into club football.”

The multi-million pound deal, which includes the introduction of an annual £500,000 prize fund, comes just days after a record crowd for women’s club football of over 60,000 was set at Atletico Madrid’s match with Barcelona.

By contrast, the largest attendance for a WSL game is 5,052, highlighting that there is still plenty of work to do in England.

Questions over the quality of women’s football, or lack thereof, is usually at the forefront of most debates about the sport, particularly on social media.

“Women’s football isn’t as good as the men’s game” is the line regularly trotted out, but the comparison is an unfair one.

Many supporters use biology and gender as something essential in their arguments, saying that it is only natural for men to be better at football.

Research has found that this mindset is based around the theory that if you take football away from men, you also take their identity.

Many men don’t like the fact that women are playing the sport – they want to have football to themselves and are afraid of not being the only ones to define the game. At best those beliefs are misguided, at worst they’re Neanderthal.

Simmons is certainly right to say that Barclays’ sponsorship of the WSL is a watershed moment for women’s football, particularly with other brands likely to jump on board over the coming months.

However, she still faces a massive battle to deliver on her prediction that the sport can break into the mainstream within the next few years.

Women’s football has taken a big step forward – it remains to be seen whether certain sections of society are prepared to come along for the ride.