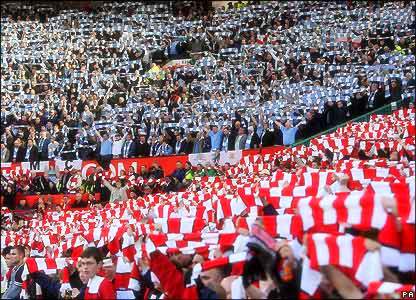 The top two go head to head on Sunday when Manchester United take on neighbours and arch rivals City at Old Trafford, and Sir Alex Ferguson’s side have to be the call at odds-against.

Indeed it’s not often that United can be backed at 2.1 to win at home, but Boylesports and Victor Chandler go that price about the Red Devils bagging all three points in the Derby clash and regaining top spot in the league from Mancini’s men.

The stats are good as Sir Alex Ferguson’s side have lost none of their last six games against the Citizens – winning five and drawing one.

United have also lost none of their last 25 league games at Old Trafford and have had by far the more testing fixtures of the two sides this season.

They have played –  and beaten – Arsenal, Chelsea and Spurs and drew with Liverpool last week when Rooney was surprisingly left out of a defensive looking starting line-up.

City have only faced Spurs from last season’s top six and have so far had an easy run of games against inferior opposition. This will be the acid test for them

Michael Owen, who has scored seven goals in eight Premier League games against the Blues, may not figure in Ferguson’s starting line-up but given his record will surely make an appearance at some point and the 3.5 on offer with Victor Chandler about him scoring anytime looks attractive.

Predicting the score line is a really tough call as United have scored with a higher percentage of their shots than any other team in the Premier League (24%), while City are ranked second scoring with 20%.

That suggests that both sides could well find the back of the net, and United to win 2-1 is my idea of the outcome and that score line at 8.5 with bet365 and Victor Chandler.

There are two other games on Sunday that throw up some potentially interesting punts.

The first features Arsenal who play host to Stoke at the Emirates, and are odds-on at 1.57 to win and continue their rise up the table after a poor start to the campaign.

The Gunners have won all three of their home matches against the Potters in the PL, and come into the game having won six of their last seven games at the Emirates in all competitions.

Stoke, on the other hand, have never excelled in away games against London clubs, winning three and losing 12 of their visits to the capital.

That makes Arsenal look “good things” to land the odds, but better value could lie in a couple of markets featuring their red-hot striker Robin van Persie.

The Dutchman’s double against Sunderland last weekend means that he has now scored 23  in 25 Premier League games in 2011, and it’s not hard to see him adding to that tally.

The red-hot striker is a 4.5 chance with Betfred, Boylesports, Paddy Power and Stan James to net the opener and that makes plenty of appeal.

However even better value surely has to be the even money (2) about him scoring anytime in the 90 minutes.

He is generally odds-on to do so and as short as 1.73 in a place. That makes the 2 on offer with Boylesports and Stan James look an absolute steal.

QPR vs Chelsea: The London derby, so to speak

Staying in London, Chelsea travel to near neighbours QPR and cannot be opposed at 1.4.

QPR are still awaiting their first home win in the Premier League this season and have won just one of the last 14 matches in all competitions against the Blues.

Neil Warnock’s side are difficult to predict as they have put in some good performances in beating Everton and Wolves away, but were woeful when hammered 4-0 by Bolton and 6-0 by Fulham.

A 3-1 win over Everton was followed by a 5-0 romp against Genk in the Champions League and it’s impossible to see the Hoops being able to halt their winning run.

Chelsea have so far won all their five matches against teams in the bottom half of the league, and an in-form striker in Dean Sturridge who is now beginning to realise his full potential.

He has so far scored four goals in the PL means and looks worth a few quid at the 5.5 on offer with bet365 to net the opener.

Chelsea have now gone seven Premier League games without keeping a clean sheet for the first time since 2003, but this surely represents a chance to put things right.

They are 1.91 with bet365 not to concede, and that looks another good bet.

Liverpool vs Norwich: Three points for the Reds

On Saturday, Liverpool should prove too strong for Norwich in their clash at Anfield but at a top priced at 1.33 make little appeal from a punting perspective.

Kenny Dalglish’s side are now unbeaten in their last four, and sit just two points behind Newcastle in fifth spot in the league.

They will be eager to take over that coveted Champions League spot from the Magpies, and this is the type of encounter which they will surely win comfortably.

The visitors come into the game on the back of a 3-1 thrashing of Swansea and also have a number of key players missing through injury.

They will be without former England under-21 striker James Vaughan, ex-Liverpool defender Daniel Ayala, Elliot Ward, who are all suffering with knee injuries as well as centre-back Zak Whitbread will be absent with a pulled hamstring.

By stark contrast Liverpool don’t have any major injury worries, and with Stevie G pulling the strings in midfield should be able to create plenty of chances for Luiz Suarez and Andy Carroll.

However those two are plenty short enough in the first goals scorer market and the value bet has to be Charlie Adam at a standout 10 with bet365.

Adam is always a threat at set pieces, and is a short as 7 with many bookmakers to net first. The Stoke firm seem to have made a rick in pricing him up at 10 and he has to be worth an interest at those odds.