With 10 games played on each matchday and 38 matchdays throughout the season, the EPL represents 380 games every year, 154 of which will be shown on live television (i.e. 16 more than currently broadcast and >40% of all top-level matches).

In a sales process that concluded earlier this week, the live TV matches were distributed according to the following model:

“The Barclays Premier League continues to provide excellent football and enthralling drama as we saw last season. The value this drives for our rightsholders is evident and we are extremely pleased that this has been realised for our UK live rights.

As ever, the security provided by broadcast revenues will enable our clubs to continue to invest in all aspects of their football activities and plan sustainably for the foreseeable future. This deal allows them to keep delivering what fans want; top quality football in some of world’s best club stadia and an increasing focus on and commitment to areas such as Youth Development.

The continuing support of BSkyB for Premier League football is significant beyond the revenues delivered; the longevity and quality of their commitment has done much for the English game as a whole. We are very happy to see this relationship maintained for another three seasons.

We welcome BT as a new Premier League broadcast partner. They are a substantial British company that is at the leading edge of technology and infra-structure development. They are clearly investing in quality content to use on their platforms and when combined with the reach and pull of Premier League football they will deliver new ways in which fans will be able to follow the competition.”

The new deal also ousts ESPN (which took over when the Setanta UK division of Setanta went into liquidation in 2009) and whose deal runs out at the end of the 2012-13 season. It is speculated Al-Jazeera also took part in the bidding.

The Premier League also extended their contract with the BBC, a deal which brings in another £179.m (a slight increase from the £173m of the current deal) for the UK’s top-flight competition. The BBC rights cover Saturday evening highlights (BBC’s Match of the Day), Sunday evening highlights, as well as highlights on other evenings whenever league fixtures justify them. In addition, highlights will be available by internet through BBC’s catch-up iPlayer service (starting 0:00am Mondays).

Put into perspective, the first TV deal of the Premier League (1992) ran at £304m over five years. EPL’s new deal is 10 times as much, and when factored in with internet rights & overseas sale (which brought in £1.4bn under the current deal), the total is likely to easily approach £5 billion over three years, by far the largest of any other top European league. 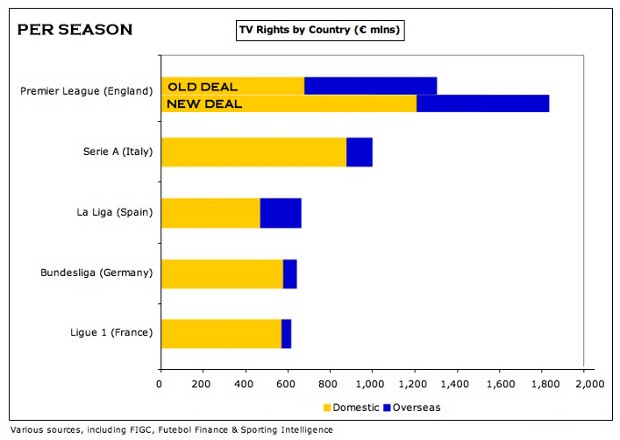 Figure modified & adapted from the original at The Swiss Ramble

The deal marks a +£14m/year increase of revenue for each football club, with the bottom team in the league to receive more than the £60.6m Manchester City earned this year for ending the season as champion. More money gives the clubs more spending power on the transfer market, and the ability to continue to attract the top football talent from all around the world, but is also likely to have the effect of bloating transfer fees & player wages (history would suggest the majority will flow directly into the pockets of players).

Scudamore pleaded with clubs not to simply use the new deal to rack up losses and fuel wage inflation. While he said he wanted clubs to still invest in the best talent, he also made a plea to invest in infrastructure and youth development, especially as UEFA’s Financial Fair Play regulations kick in. “We are entering a new era with financial fair play [the new Europe-wide regulations of club spending], I’m hoping it will get invested in things other than playing talent. It should also be able to achieve sustainability“, he said.

What this means for the average UK football fan however, is probably less exciting. “This £3bn windfall, which looks so glittering in a Britain double-dipped into recession” (which supporters undoubtedly see as a means to sign better players and make their club more competitive) “is for a more homespun business: selling TV subscriptions in Britain, to pubs desperate for regulars, and folk at home” says Guardian‘s David Conn.

This money is 10 times the £305m first TV deal struck by the breakaway league, over five years from 1992, which at the time was itself a whole new ball game.

Also, despite all the money coming in from BSkyB TV rights, most clubs still struggle to break even and Conn maintains that the players (i.e. “the product”, as their more blunt-speaking agents describe them) ensure “their wages escalate with every swelling of the TV pot”. Currently 70% of Premier League money goes into wages + agent fees (more details here).

Also see – illustrated history of English Football Finances (from 1981 to 2011).

Premier League shares (just) 8.75% of its income with the rest of football including grassroots football (excl parachute payments). Over 3 years between 2013 and 2016, this will amount to £262.5m.