It’s amazing how many people seem to know a “reliable source” on deadline day. It’s also surprising just how many people seem to camp outside their club’s home stadium, just to try to get a glimpse of their latest star. In-truth most of these reliable sources, or sightings of players, that build up the excitement amongst fans, are a figment of one fans imagination. Indeed, Wesley Sneijder was spotted in Grimsby at one point yesterday.

In the end the biggest deal completed on deadline day was that of Asamoah Gyan. Sunderland splashed out on a record transfer, of £13 million, for a player who is most famous for a missed penalty at the World Cup. To be fair to Gyan that statement is a little harsh on him. He was the talisman for Ghana, and most of Africa, throughout their World Cup campaign and the striker has had a good career at Rennes. For Sunderland fans the thought of a strike-force that consists of Darren Bent and Asamoah Gyan is exciting, even more so due to the fact they finally have another player who threatens to trouble the opposition goal-keeper. Sunderland’s reliance on Bent’s goal-scoring has been particularly evident this season, with the departure of Kenwyne Jones; Bruce needed another striker. In Gyan he has one of the stars of the World Cup, he has a partner for Bent and he has another goal-threat. 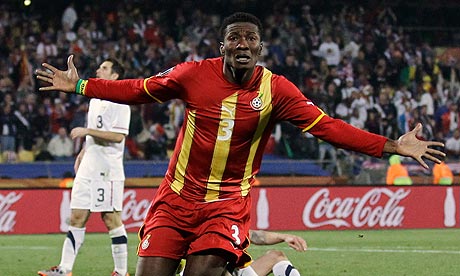 Birmingham City were also very busy. Much was promised when the new owners took over, with Carson Yeung pledging to provide Alex McLeish with £80 million to spend on new talent. Until now McLeish hasn’t brought players of a team with that sort of money to spend; does the transfer of Matt Derbyshire really send-shockwaves across Birmingham? Bringing Alexander Hleb to St. Andrews did though. But this transfer may be trumped by a lesser-profiled Chilean winger named Jean Beausejour. Beausejour arrived from Club America for an undisclosed fee and the tricky winger has pace and strength that will mean he should adapt to the speed and vigour of the Premier League quickly.

When one Premier League team can afford to loan players that would be considered ‘hot prospects’ at their club to another where they will immediately go into the first team it goes to show the gulf in class between those teams chasing the Champions League and the clubs fighting off relegation. Having said this Wigan will be relatively happy with their two loan recruitments. Tom Cleverley and Franco Di Santo will add some much needed youthful exuberance to a team struggling to be exuberant about anything at the minute. Cleverley may even be able to force himself into contention for an England place with a good season at this level and Capello will have his eyes on the young Manchester United midfielder’s progress.

Tom Cleverley has gone on loan to Wigan.

Elsewhere Blackpool’s hero, DJ Campbell, has returned and will go straight into the first team to give the relegation favourites another attacking threat. Paul Konchesky made the move to Liverpool, to team up with old manager Roy Hodgeson, who wasn’t going to buy anyone from Fulham after he left… But finally would any transfer round-up be completed without a mention of Robinho? He’s moved to AC Milan for a reported £22 million after having a turgid time in Manchester.

Ultimately though the biggest news of this transfer window may be that Arsene Wenger still seems reluctant to sign a goalkeeper. Whilst North London rivals, Tottenham, added Stipe Pletikosa to their goalkeeping department that already contains Heurelho Gomes and Carlo Cudicini, Arsenal fans will have to wait, at least, until January after Wenger couldn’t, for whatever reason, sign Mark Schwarzer and didn’t even make an attempt to sign Shay Given. And you can’t help but feel that whilst Arsenal have Manuel Almunia or Lukas Fabianski in goal they won’t win the Premier League title.