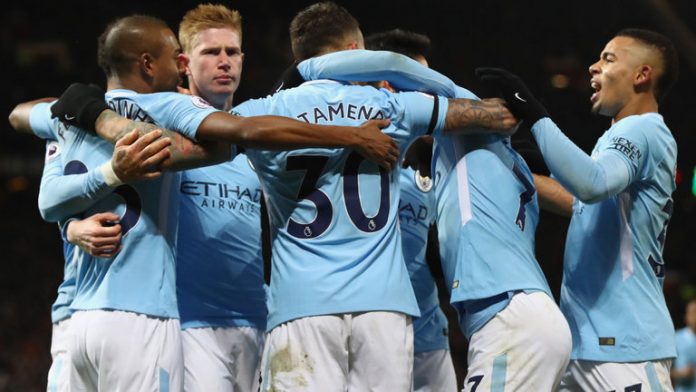 It was another action-packed weekend in the Premier League, with plenty going on at both ends of the table.

Manchester City’s victory at Everton means they can clinch the title with three points against Manchester United next Saturday, while there were important wins for Newcastle United and West Ham United in the battle to avoid relegation.

Sportslens take a look at the top five talking points from the latest round of matches.

City’s 3-1 success at Everton on Saturday leaves them needing to beat United at Etihad Stadium next weekend. Hands up anyone who thinks that will be a pretty game to watch? Anyone? Thought not.

If there is one man in the world who will be desperate to spoil the party it’s United boss Jose Mourinho.

Souness not wrong, but Klopp has improved Liverpool

Graeme Souness accused Liverpool of lacking the “real magic” needed to win the Premier League and it’s difficult to argue with his opinion right now.

However, Jurgen Klopp does now appear to have the Reds heading in the right direction and they look nailed on to secure a top four spot this season.

If Klopp can find a way to sprinkle some stardust on his team this summer, Liverpool could be a force to be reckoned with next term.

The mood around the London Stadium on Saturday was much more positive and West Ham’s players responded in style to boost their hopes of avoiding the drop.

The home supporters rallied around to roar the Hammers on and their team put Southampton to the sword to put five points between the two sides at the final whistle.

West Ham have a horrible looking run-in, but this sort of atmosphere could make the difference over the next few weeks.

Rafa Benitez – Manager of the Year?

Saturday’s 1-0 victory over Huddersfield Town moved Newcastle United onto 35 points and they look a good bet to be in the Premier League again next season.

Since the start of the year United’s improvement has been tremendous. They have lost only twice in the league – to City and Liverpool – and they have the 7th best defence in the top flight.

Benitez’s ability to organise his backline was always likely to be the difference for the Magpies this season, and his efforts with limited resources deserve recognition. Manager of the Year? Stranger things have happened.

Goodbye Antonio – it was fun while it lasted

Chelsea’s 3-1 defeat at home to Tottenham Hotspur leaves their hopes of qualifying for the Champions League hanging by a thread.

The Blues are now eight points adrift of the top four with seven games to play and that looks an insurmountable gap at this stage.

Chelsea’s last hope of success this term is the FA Cup, but winning that is unlikely to be enough to see manager Antonio Conte remain in charge beyond the end of the season.