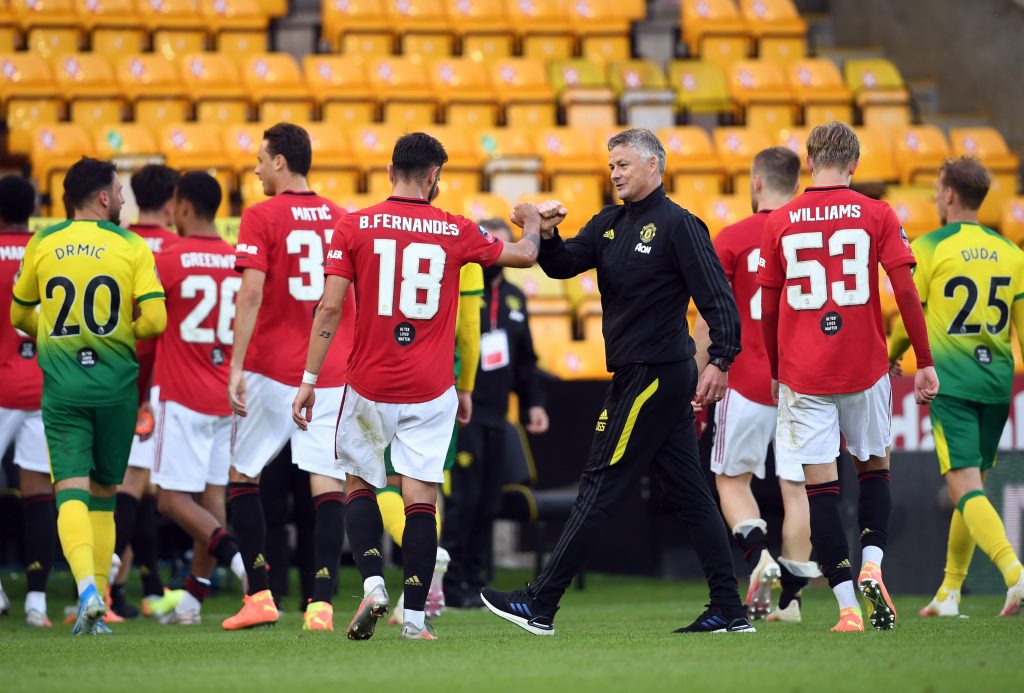 The latest round of fixtures in the Premier League have set-up a thrilling battle to claim a top four spot this season.

Liverpool and Manchester City will finish first and second, but many online guides have found it tough to predict who will grab third and fourth.

Leicester and Chelsea currently hold those positions, but Manchester United and Wolverhampton Wanderers are breathing down their necks.

Read on as we assess the run-in for each of the four teams and predict who we think will finish in the top four this term.

The Foxes looked on course to finish third this season, but two points out of a possible 12 since the restart has reduced their advantage.

They were poor in the first-half at Everton on Wednesday and, although they improved after the break, they failed to snatch a point.

Their run-in looks tough, with trips to Arsenal, Burnley and Tottenham Hotspur unlikely to yield too many points if they don’t rediscover their best form.

Home games against Crystal Palace and Sheffield United are both winnable, but the final day clash with Manchester United is difficult given the Red Devils’ current form.

Many pundits were beginning to get a bit giddy about Chelsea after they won three league games on the spin following the break, but their defeat at West Ham United on Wednesday brought everyone back down to earth.

The Blues should pick up maximum points from home fixtures against Watford and Norwich City, but may find things tricky at Crystal Palace and Sheffield United.

Chelsea will hope that newly-crowned champions Liverpool take their foot off the gas when they meet at Anfield, although that is unlikely to happen.

Their meeting with Wolves on July 26 could determine who finishes in the top four and it may end up being a disappointing day for anyone of a Chelsea persuasion.

United continue to look much-improved under Ole Gunnar Solskjaer and most pundits are predicting that they will force their way into the top four.

They were ruthless at Brighton & Hove Albion on Tuesday in a performance that was a throwback to Sir Alex Ferguson’s time in charge of the club.

Home fixtures against Bournemouth, Southampton and West Ham should be easy to navigate, while visits to Aston Villa and Crystal Palace also look good for victories.

United may already have secured a top four spot by the time they travel to Leicester, but would be fancied to pick up a positive result there if they need one.

Wolves are still flying under the radar a little, but it would be foolish to underestimate their chances of finishing in the top four.

Nuno’s side haven’t conceded a goal in three victories since the restart and their run-in looks reasonably favourable.

Arsenal, Everton and Crystal Palace still have to visit Molineux, but Wolves are certainly capable of picking up nine points from those games.

They can also collect points from trips to Sheffield United and Burnley, potentially leaving the clash with Chelsea on the final day as a top four decider.

Prediction: United look nailed on to finish in the top four, with Chelsea and Wolves expected to fight out the other spot. Nuno’s team should prevail in that battle.