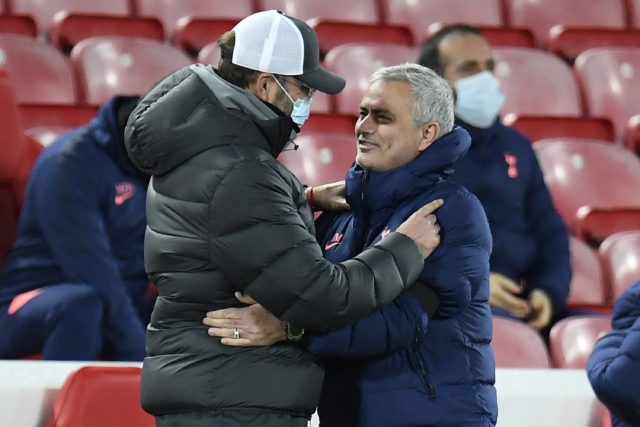 The Premier League standings could be set for a topsy-turvy midweek as Liverpool travel to north London to face Tottenham Hotspur on Thursday.

Everton will be looking to close the gap with other title challengers when they take on Leicester City at Goodison Park, while a new era is set to commence at Stamford Bridge following the sacking of Frank Lampard, with Chelsea facing Wolverhampton Wanderers.

Elsewhere, Premier League leaders Manchester United will look to consolidate their top position in the EPL 2020-21 table when they face bottom-placed Sheffield United at Old Trafford.

Manchester City can stretch their winning run to 11 in all competitions if they win against Sam Allardyce’s West Brom at the Hawthorns.

A late goal from Bobby Firmino earned all three points for the Reds the last time the two sides met at Anfield which was a top-of-the-Premier League table-clash at that point.

Spurs can leapfrog Liverpool in the EPL table this week, with the Reds horribly struggling for form. Liverpool are without a win in their last five Premier League games, while Spurs are undefeated in their last eight games in all competitions.

Rio Ferdinand claimed recently that the Toffees should be considered as one of the title contenders after their impressive form under Carlo Ancelotti this season.

Everton have won back-to-back games ahead of this fixture, but they have also lost 1-0 against West Ham at Goodison Park recently. The Foxes are flying high under Brendan Rodgers, winning five games in a row.

The Magpies are yet to win a game in any competition since 12th December, and another frustrating result on Tuesday could see the end of Steve Bruce’s tenure at the Tyneside club.

Leeds have lost three games in a row in all competitions, and Marcelo Bielsa’s side will look to return to winning ways, with Kalvin Phillips set to return.