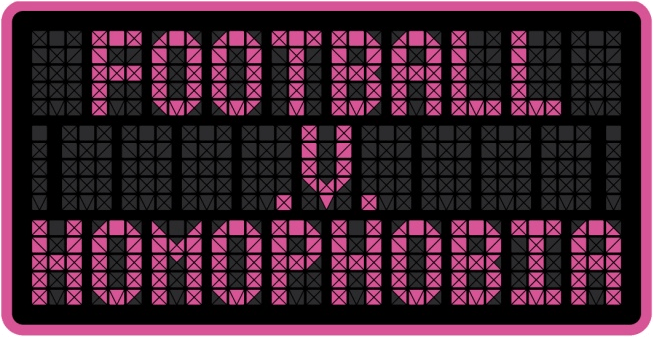 Arsenal, Chelsea, Manchester City, Manchester United and West Ham are among the first to join the ‘Football v Homophobia’ campaign, with the group hoping to gain support from at least 50% of professional clubs in England. The Hammers kicked off a month of action in February by sporting Football v Homophobia T-shirts before their 2-0 win over Swansea last Saturday. The idea of the campaign is to challenge homophobic behaviour by encouraging change in the way football players and supporters behave towards Lesbian, Gay, Bisexual and Transgender (LGB&T) people, increasing education and reducing discrimination.

The Football v Homophobia group aim to enable people to take action against discrimination in order to create a welcoming and inclusive football environment. Existing football structures need to be made safer and opportunities need to be created for LGB&T people to engage with football, 6% of the English population are gay and the representation of LGB&T people in the sport needs to be improved. There have been no openly gay professional footballers in England since Justin Fashanu in 1990. Former Leeds winger Robbie Rogers and ex-Aston Villa midfielder Thomas Hitzlsperger waited until they retired before revealing they were gay; suggesting both the ‘changing room culture’ and the hostile reaction they risked receiving from fans and the media made them uncomfortable revealing their sexuality sooner.

Brighton & Hove Albion players, as well as their fans, have previously been subject to homophobic abuse from opposition supporters while some professional players have even posted homophobic messages on social media. Liam Davis, Gainsborough Trinity midfielder, says he has only ever received one snap comment regarding his sexuality from the opposition, and that there has been no dressing room issues at any of the clubs he has been at. Davis is sceptical of the authorities’ approach to homophobia, believing they should do more to tackle the problem.

The Football Association are working to identify boundaries within football that prevent LGBT people from engaging with the sport, ensuring that every opportunity is given to enable members of LGB&T communities to participate and progress within their chosen area of participation in football. A high priority is to combat negative homophobic and transphobic language used in football – whether by spectators, players, coaches or any other bodies involved. The FA have launched their own campaign, ‘opening doors and joining in’, aiming to tackle homophobia and transphobia within football, more details can be found on The FA Website.