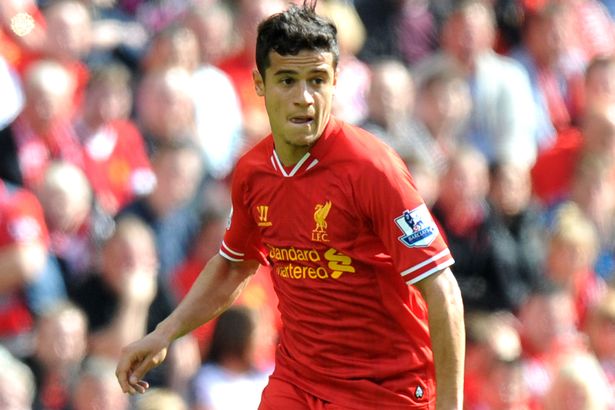 Barcelona forward Neymar has backed his compatriot Philippe Coutinho to continue improving and establish himself as the best player in the Premier League.

Neymar said: “He can be the star player in England. This season I think everybody in England is seeing how talented he is – and I know he has a lot more to show.

The Brazilian has been an important player for the Reds since his move to Merseyside two years ago. Although Coutinho’ talent was never in doubt, the supremely talented midfielder has always been criticised for his inconsistency.

However, over the last few months, Coutinho has taken his game to another level and has been one of the most consistent players in the league. Coutinho’s performances have been key to Liverpool’s resurgence as the Reds look to make a late challenge for the fourth and final Champions league spot.

Coutinho’s performances have also earned him a recall to the Brazil squad as manager Dunga stated that the little magician will be a key player for his club and country going forward.

“He will play a big part in the future of the national team,” he said. “The national steam is very strong, but the way he is playing for Liverpool, I’m sure he will be a big part of Brazil going forward”, Dunga said.

Liverpool manager Brendan Rodgers has also been extremely impressed with Coutinho’ development and stated that the Brazilian has earned his new contract, which will see him double his wage and keep him at the club till 2020.

“You would just pay money to watch that kid. He is a great role model for lots of technical players in this country, young British players that for maybe many years would have been discarded because they were technically good but not as big a stature.

“He will become world class in the next couple of years. Luis Suarez was at a level then he played in this team and grew and grew with the model and went into the world-class bracket and I can see Coutinho falling in the same sort of way.

“He might not be as prolific as Suarez was but he is certainly on the way to that. He is a wonderful, wonderful player. Signing a new deal shows he is really committed to Liverpool and his development”, said Rodgers.

Neymar and Coutinho have been friends since childhood and the Barcelona superstar reckons that Coutinho is one of those special talents who can make things happen all by himself, much like Neymar’s new teammate, Luis Suarez.

“I think since Luis joined us at Barcelona, Liverpool have not had that one player they can look to for that special moment,” said Neymar.

Further he also stated that Coutinho is not only a good player, but a great person to have around the dressing room.

“We have been good friends since we were 16. Not only is he a fantastic player, he is a good guy to have in the dressing room, always positive and making jokes”, he said.

After a poor start to the season, Liverpool have somewhat steadied the ship with a recent streak of good results and Coutinho has been the key for Brendan Rodgers’ improved side.

Whether Coutinho manages to keep up his consistency remains to be seen, but the young Brazilian is prodigiously talented and there is no reason why he cannot establish himself as a world class player at Liverpool.