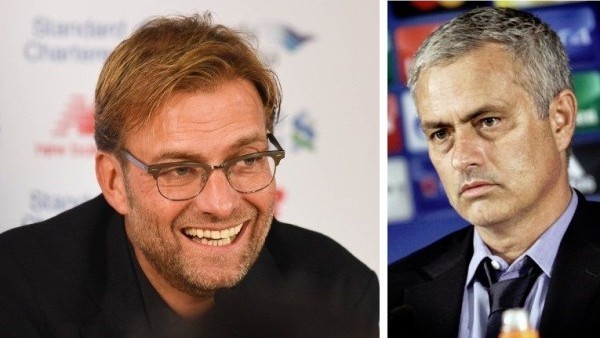 We are into game week 11 of the Premier League, and as usual, there are some cracking line-up of EPL games to whet our appetite.

The clock is ticking… Which #BPL Matchweek 11 fixture are you most looking forward to? https://t.co/YuRA48GjSJ pic.twitter.com/ZcrASdYrfF

The obvious big game of the weekend is the titanic clash between an underperforming Chelsea side and Jurgen Klopp’s Liverpool at Stamford Bridge. Quite a way to start the round of fixtures off!

Heading towards the top of the table, Manchester City have a relatively straightforward task to win against Norwich City, whom the Citizens beat 7-0 in the last corresponding fixture in 2013.

Tricky away games await both Arsenal and Manchester United as they travel to Swansea and Crystal Palace respectively. Swansea have already taken four points this season from two games against last season’s top four teams thus far, drawing with Chelsea and winning against Manchester United.

Meanwhile, Palace’s good start to the season has somewhat petered out following a run of three successive losses in all competitions although Alan Pardew’s men still carry a significant threat to trouble Louis van Gaal’s Manchester United, who are themselves on a low after their midweek League Cup exit.

Stoke City travel to Tyneside to take on struggling Newcastle with Mark Hughes eager to right the wrongs of last weekend’s home loss to Watford. Newcastle are still reeling from their derby defeat to Sunderland last time out, a 3-0 defeat at Sunderland.

The last two games on Saturday pits Watford against high-flying West Ham and West Brom against Leicester City. Both Watford and West Ham are on the back of impressive wins and will look to maintain their momentum.

West Brom, who have kept six clean sheets this season, face a tough task to stop the Foxes attack, which has scored the third highest number of goals this season and boasts of Premier League’s top scorer, Jamie Vardy.

Sunday’s games include Sunderland’s visit to Merseyside to take on Everton while Southampton entertain struggling Bournemouth. Everton have only collected a single point from their last three games against Liverpool, Manchester United and Arsenal and the Toffees will be keen to notch a win against Sunderland, who themselves are on a high following their derby defeat of Newcastle.

Southampton will fancy their chances against struggling Bournemouth, who haven’t tasted a win since last month and have let in ten goals in their last two league games.

There is even a Monday night kick-off this game week as Tottenham Hotspur host struggling Aston Villa at White Hart Lane. Villa, who are in a state of flux following Tim Sherwood’s sacking last week will be up against an in-form Spurs side that put five past Bournemouth last time out.

Let’s check out all the fixtures from Premier League Game Week 11:

Ahead of week 11, let us take a look at the updated EPL table after week 10 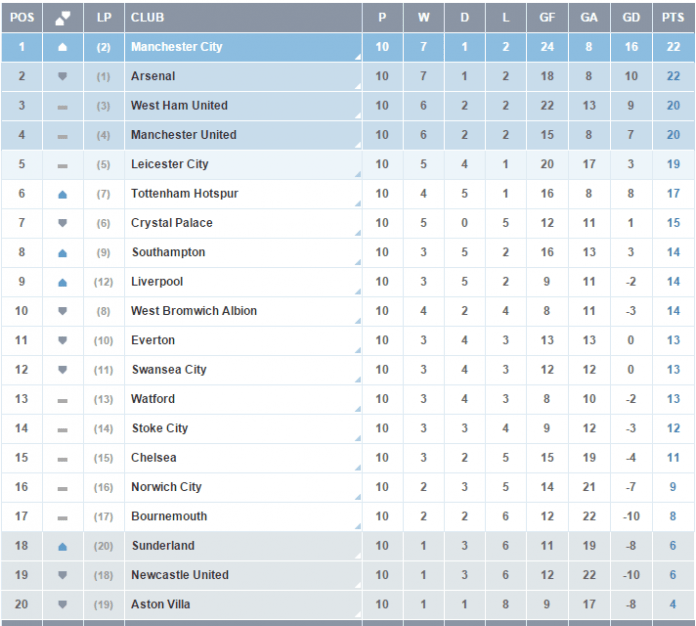 Chelsea face a rejuvenated Liverpool side under Jurgen Klopp in Saturday’s lunchtime kick-off at Stamford Bridge. Jose Mourinho is under all sorts of pressure, and all the build-up for the game is focussed on the Mourinho v Klopp rivalry.

This Halloween, it’s the Special One v the Normal One! Watch #CHELIV live on @btsport 1 and @btsport Ultra HD. pic.twitter.com/tosF8vLDal

Liverpool recorded their first win of the Klopp era against Bournemouth in the League Cup, which will see a new champion this time as holders Chelsea were knocked out by Stoke in midweek. For more detailed reading on the game, head over this way.

The Swans have been through a patchy run of form heading into Saturday’s clash with the Gunners, who are themselves smarting from midweek’s 3-0 loss to Sheffield Wednesday in the League Cup. Garry Monk’s Swansea have already taken points off Chelsea and Manchester United this season, and even did the double over Arsene Wenger’s men last season.

21 – No player has more assists in the Premier League than Mesut Özil (21) since his debut in September 2013. Maligned.

Arsenal have won their last four league games, scoring 13 goals in the process. They are off the top of the table only on goal difference. Swansea are 12th, and last weekend’s win over Aston Villa was their first in the month of October. Read the detailed preview of the game here.

Like Arsenal, Manchester United will head into a tricky game against Crystal Palace on the back of midweek’s League Cup setback against Middlesbrough. Alan Pardew’s Palace are on a poor run of their own, but have been quite the revelations this season. The Eagles currently sit in 7th, five points and three places adrift of United.

Last time Palace faced a team from Manchester, they were handed a pasting by Manchester City. Wednesday night’s 5-1 loss was Palace’s third on the bounce, and in United, they face far superior opponents than they would have liked to face with their form nosediving. Read the detailed preview of the game here.

Let me know your game week 11 predictions below.