The rest of Europe is still enjoying their winter break as the Premier League prepares for their first fixture of the year 2013 on January 1st and 2nd – the very first day of the year.

The winter transfer window also opens on the same day but the opponents of all the three teams in the relegation zone are sitting pretty in the top five of the table. They may seem like straight-forward ties but pulling level with them or a win will definitely be a great start to the new year. 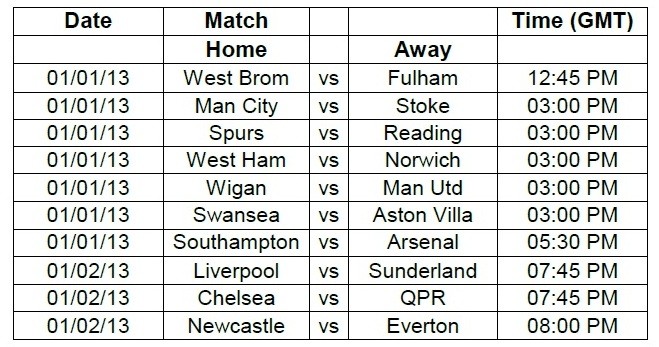 Manchester United look terrific value at 1.57 with Betfred to beat Wigan at the DW Stadium.

The Red Devils have traditionally filled their boots against Roberto Martinez’s men, and this represents a golden opportunity for them to maintain their healthy lead at the top of the table between them and their nearest pursuers City.

Yes, Wigan did manage to secure their top-flight survival when they won this fixture 1-0 back in April. But they were on a tremendous run at the time and had not managed to secure a single point from 14 previous encounters with United netting 46 times compared to the Latics’ 5.

Indeed it was a case of normal service resumed when they last met at Old Trafford, with Sir Alex’s men registering an easy 4-0 success.

It would be no surprise to see United register a repeat of that scoreline in this, however I can see Wigan getting on the scoresheet and I like the look of a 3-1 or 4-1 win for United at 12 and 21 respectively with bet365.

Robin van Persie, who came off the subs bench to score in United’s 2-0 win over West Brom looks a solid favourite at 4 with Paddy Power in the first goalscorer market, and cracking value at a standout 1.8 with Boylesports just to get on the scoresheet.

Manchester City are 1.3 with Betfred to beat Stoke City at the Etihad, and look worthy long odds-on shots to do so.

Roberto Mancini’s side haven’t been at their best of late, but they got back to winning ways with a 4-3 win at Norwich on Saturday and should have too much fire power for the Potters given their terrific home record.

However they need to make sure that they don’t take Stoke for granted as Tony Pulis’ men are now unbeaten in their last 10 games and have shown tremendous battling qualities and character in that period.

The stats are certainly good though as far as city as concerned as they have all four Premier League renewals of this fixture.

They have also managed to keep a clean sheet in those games, and that makes the standout even money (2) with Paddy Power about them winning this to nil look well worth an interest.

Dzeko was the inspiration behind the Citizens win at Carrow Road when he was promoted to the starting line-up and quickly slotted them 2-0 ahead inside four minutes.

He will surely getting another start in this judged on that outstanding display looks worth a punt at 5 with bet365 to net the opener.

He can also be backed at evens (2) with bet365 and Paddy Power in the anytime scorer market and that looks a bit of value given that he is generally a 1.91 shot.

Arsenal are in terrific form at present and look a cracking bet at 1.73 with Betfred to beat Southampton at St Mary’s.

The Gunners are bidding to make it make it four Premier League wins on the bounce following their 7-3 drubbing of Newcastle at the Emirates on Saturday.

Theo Walcott was outstanding in that game, and a hat-trick means that he is now the top scorer for Arsenal in the league with 8.

He looks the obvious choice in the first goalscorer market given his current mood, and can be backed at a standout 6.5 with bet365.

In the anytime scorer market one player that looks a bit of value if in the starting line-up is Alex Oxlade-Chamberlain who cab be backed at 3.6 with Paddy Power to score against his former club.

As far as the stats are concerned, Arsenal have won 36 of the 71 league meetings between the two sides and they beat the Saints 6-1 the last time they met at the Emirates back in September.

The other bet that really appeals is for their to be over 2.5 goals at the 1.67 on offer with Betfred as Arsenal have managed to score 14 in their last 3 games.

Tottenham are 1.36 with Betfred and Paddy Power to beat Reading at White Hart Lane and look banker to do so and maintain their excellent run of form.

Saturday’s come-from-behind 2-1 win at Sunderland means it’s six wins in eight and they continue to impress under Andre Villas-Boas.

Gareth Bale is arguably the best player in the Premier League at present, despite the fact that he once again received some unwelcome press at the weekend and Jermain Defore is looking the real deal as the main man up front.

With Bale ruled out of this clash after getting controversially booked for diving against the Black Cats, Defoe looks the one to be on in the first goalscorer market at 4.33 with Betfred.

I fully expect Spurs to register a comfortable success, despite the fact that Reading have managed to steady the the ship and put in some decent performances over the Christmas period, and win without conceding. They are a tasty looking 2.2 with bet365 to win to nil

The other bet that really standout is for the second half to produce the most goals at even money (2) with Betfred and Paddy Power.

Spurs have played 28 games this season, and in 20 of them the second half has seen more goals scored. That includes six of their last seven, and those are compelling stats which make a similar outcome an odds-on chance in my book.

Chelsea are long odds-on at 1.22 with Betfred and Paddy Power to beat QPR at Stamford Bridge and it should really be just a case of how many they win by.

The Blues showed a great attitude to come from behind and beat Everton 2-1 at Goodison on Sunday, a result which means they are now just four points adrift of Man City in third position with a game in hand.

It also means that they have now lost just twice in their last 11 Premier League and cup fixtures since Rafa Benitez’s arrival, and they face a side here who are in woeful form.

Harry Redknapp’s side were readily brushed aside 3-0 by Liverpool at Loftus Road at the weekend and have won just one game all season.

They have also never beaten their London rivals in a league fixture at Stamford Bridge, and were thrashed 6-1 in this fixture last season.

Frank Lampard was reportedly told to look for a new club in January but his brace against Everton could help win a contract extension after 11 years at the Bridge.

He has now scored 3 in his last 3 matches and makes plenty of appeal in the first goalscorer market at 7.5 with bet365 and also looks decent value at 2.63 with Betfred to net anytime during the 90 minutes.

Liverpool play host to Sunderland at Anfield and look worth a wager at top priced 1.44 with Betfred to come out on top in what promises to be a hard fought affair.

The stats aren’t that good as far as the Reds are concerned as they have won only two of their last seven Premier League games against the Black Cats after winning each of the previous six.

They have also won only six of their last 21 league games in January, but do come into the game on the back of an easy 3-0 win at QPR on Sunday.

Brendan Rodgers’ side were value for far more than the winning margin, and Luis Suarez looked sharper than ever in bagging the first two to send them on their way to an easy victory.

If he turns up in the same form here then the 4 on offer with Betfred and Paddy Power about him netting the opener could be terrific value.

The other player that appeals in the goalscoring markets is Steven Gerrard as he has scored in each of Liverpool’s last two games at Anfield.

He is priced up at 7.5 with bet365 to bag the opener and can be backed at a standout 2.88 with Paddy Power to net anytime.

Another bet that standout is under 2.5 goals at odds of 2.1 with Boylesports and Paddy Power as four of the last six meetings between the two sides have resulted in such an outcome.