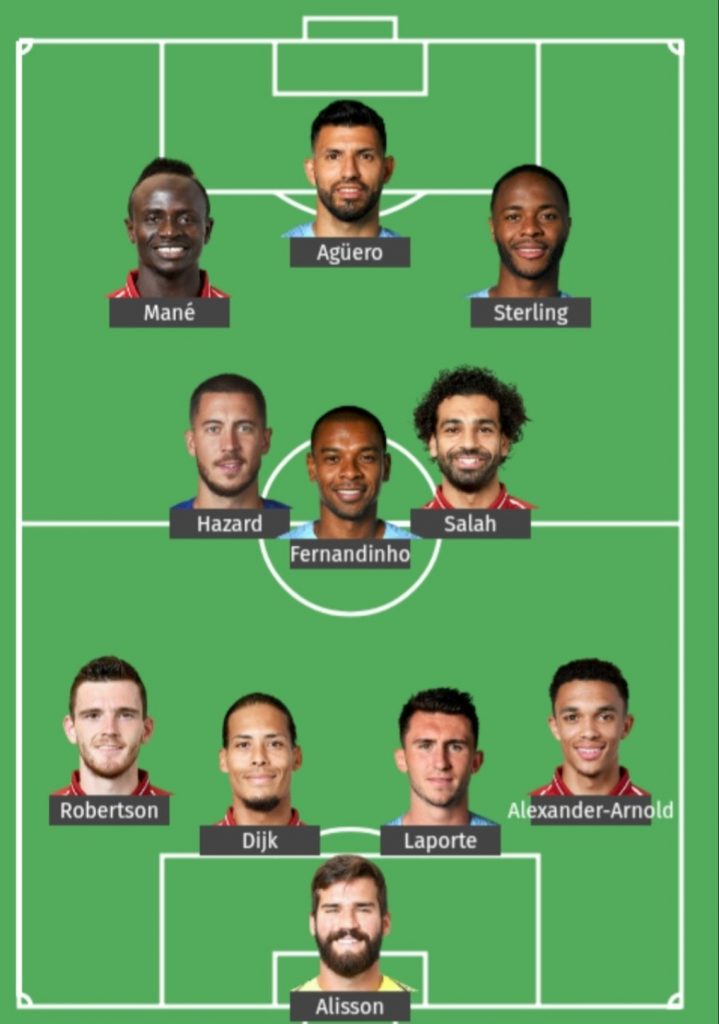 With the 2018-19 English Premier League season gradually coming to an end, the Professional Football Association(PFA) Team of the Year is set to be named soon, and going by the performances of all the players from the 20 teams that have involved in action thus far, the PFA Team of the Year could look like this:

The Liverpool goalie has justified his £67million fees since arriving from AS Roma last summer, keeping 17 clean sheets in 34 Premier League appearances and conceding just 20 goals.

With the Reds hoping to win a first-ever EPL title, the 26-year-old has played a huge role alongside a great defence.

With nine assists in 32 games, the Scotland international has been crucial to Liverpool’s attack this term despite being a fullback, and he has been head and shoulders above other left-backs without a doubt.

Eyelids were batted when Liverpool splashed £75million on the Dutchman last winter, but the Player of the Year contender has been worth every penny and is now regarded as arguably the best centre-back on the planet.

If the Anfield outfit end up winning the Premier League, the influence of the 27-year-old, who has scored thrice, assisted twice and completed 2591 passes would have proved vital to their title triumph.

Manchester City are looking to retain their title, and the French defender has been crucial to manager Pep Guardiola’s defensive plans, playing more minutes than any of the club’s defenders and weighing in at the other end with two goals and two assists in 30 games.

The 20-year-old is a contender and favourite for the PFA Young Player of the Year prize after helping Liverpool to the top of the table with seven assists and a goal in 25 games, and he surely has been the best right-back in the league this season.

With 16 goals and 12 assists in 33 games, the Chelsea star has been involved in more goals than any other player in the league and could have been a Player of the Year contender if the Blues weren’t struggling for a top-four finish.

Manchester City have relied heavily on the Brazilian’s bite and grit in the middle of the park this term, and he has been a great shield for their defence.

He has been the ever-reliable link between defence and attack for Pep’s side, and it’s safe to say they wouldn’t be contesting for the title without his great influence.

The Egyptian has 19 goals – the joint-most this term – and seven assists in 34 games for Liverpool, and while he hasn’t been able to reach the heights of last season, he has been key to the Reds’ title challenge.

The Senegalese has 18 goals in 32 games this season and is likely to pip other challengers to the Golden Boot.

Liverpool’s attack is key to their title challenge and the 27-year-old has played a huge role in ensuring it ticks.

The Argentine could win his second Golden Boot this term after helping City with 19 goals and seven assists in 28 games, and winning another Premier League title alongside will definitely delight him.

The 24-year-old is widely regarded as huge favourite for the PFA Player of the Year prize, and with 17 goals and nine assists, not many can doubt his brilliance this term.

City’s chances of retaining the league title would rely on how he fares in the next five games.