Post El Clasico: It’s wasn’t all about Barcelona being super 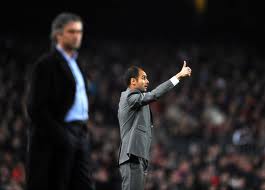 Oddly humble from Jose Mourinho, yet maybe not. It’s hard to defend your corner with a matchstick, as some saying may or may not go – the match wrote Mourinho’s statement for him here. Madrid will return home humiliated, regardless of what Mourinho says. Their team constructed from hundreds of millions made to look not dissimilar to Almeria by a Catalan side which was awesome,  unstoppable, all the invincible superlatives you could think of.

The score could have been 7-0 and Mourinho would surely not have gathered the courage to say that it was an unfair reflection. And once again, FC Barcelona have lit up the world with their display – and sent a shiver down the spines of every team which may be unfortunate enough to finish second in their champions league group. A one in seven chance of elimination right there when the draw is taken is not something to look forward to.

So rather then trying to find more superlatives for Barcelona lets focus on what Madrid did wrong. Firstly, Mourinho made a similar mistake to Pellegrini – for some reason, both of them thought that two midfielders against Iniesta, Xavi and Busquets, with Messi dropping back to help out, was a good idea. It’s safe to say that it’s really, really not – two midfielders against that monster foursome is going to and did get torn apart. Mourinho brought on Diarra at the break, but the damage was already done – Madrid pushed up and paid a handsome sum for it.

Secondly you have to wonder wheather Mourinho and his players thought after their run of form that they would be able to bring the same kind of brutality they have been dishing out to every other team in La Liga upon Barca’s head – an easy idea to be seduced by considering their recent form – certainly this idea was in Harry Redknapp’s mind when he visited the San Siro with Tottenham. This was not a performance befitting Mourinho’s recent duels with Barcelona with Inter Milan – who made Barcelona look harmless both at home and away. This was a performance befitting a team who thought they could beat Barcelona at their own game, untill about ten minutes in, when Xavi’s excellent run and finish broke the deadlock that was never going to be broken by Madrid.

It didn’t just look as if Barcelona were out of this world good, it looked as if Madrid arrived bereft of ideas about what to do about it. Even the youth players made their mark on a team that hasn’t been humiliated so badly since the 4-0 defeat against minnows Alcorcon, and before that, Liverpool in the champions league, and before that, Barcelona again, 6-2 at the Bernebau. Possibly, this is their worst humiliation in quite some time.

Perhaps Mourinho didn’t want to play this way at all. Perhaps the culture of Madrid, and this massive rivalry expects that Madrid play Barca on footballing terms, rather then the tactical terms Mourinho would prefer. But surely this is bunkum. Better a win for Madrid playing containing counterattack football then a result like this.

Either way it is done. There is still a title race to be had and Madrid are scant points behind Barca – if Carvalho and Ramos had managed to break Messi’s legs in that awful set of challenges, they could even have been favorites. But none the less the Galacticos are humbled. The Special One’s aura of invincibility is shattered for a while. And it was not, even with the sterling form of Barcelona, a beating entirely inflicted by the Catalan’s in last night’s Nou Camp encounter.