Liverpool host Blackburn Rovers at Anfield in the FA Cup quarter final on Sunday. The Reds will fancy themselves to qualify for the semi final of England’s oldest cup competition in front of their vociferous home faithful. Brendan Rodgers’ side have been in stunning form in the Premier League and should have it easy against their mid-table Championship opposition.

Rodgers is expected to filed his strongest possible side but will miss Brad Jones, Lucas Leive and Jordon Ibe while Steven Gerrard is still a doubt for the game. Gerrard though is expected to make his return in the Premier League next weekend.

Simon Mignolet will start under the sticks as Rodgers is expected to field his favoured 3-4-3 setup. Emre Can, Mamadou Sakho should play in the back three on either side alongside Martin Skrtel while Jordan Henderson and Joe Allen are expected to hold fort in midfield.

Lazar Markovic and Alberto Moreno could be given the wing-backs role as Philippe Coutinho and Raheem Sterling could support Daniel Sturridge up front. Mario Balotelli could also feature late on from the bench.

Here is the possible Liverpool starting line-up against Blackburn: 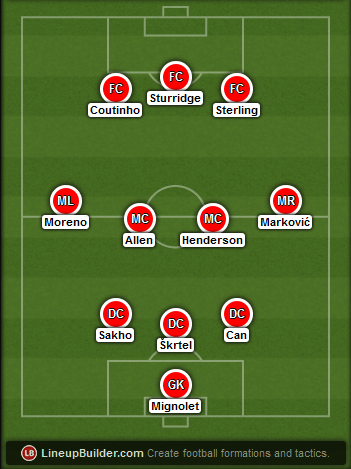 Predictions: Liverpool should win this easily at home as I predict a 3-0 scoreline in favour of the Anfield outfit.