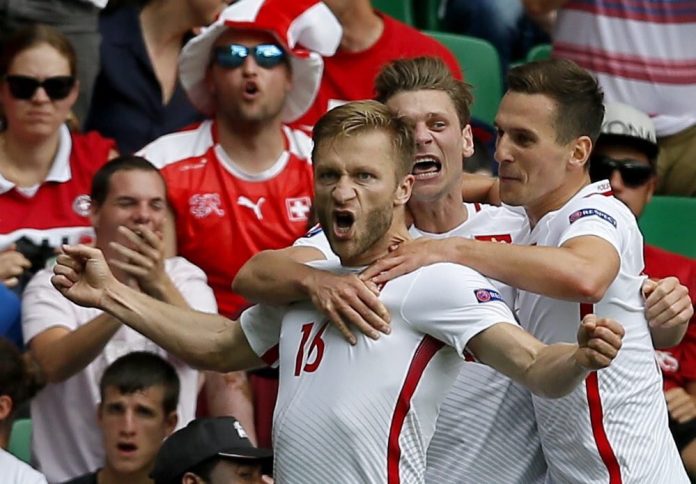 Poland are the first team to book their place in the quarter-finals of Euro 2016 with a penalty shootout win over Switzerland in Saint-Étienne this afternoon.

The two sides played out a 1-1 draw over 120 minutes before Arsenal’s new signing Granit Xhaka missed the only penalty in the shootout.

Arkadiusz Milik had the opportunity to give Poland the lead inside a minute after a defensive mix up involving Yann Sommer but the Ajax striker skied his effort from 20 yards with an open goal to aim at.

It was a cagey and dull first half until Borussia Dortmund’s Jakub Błaszczykowski, who spent last season on loan at Fiorentina, scored the only goal in the opening 45 minutes, on the counter-attack.

Switzerland didn’t come into the game until the final half hour when Poland appeared to be tiring.  The group A runners-up had had an additional two days recovery time since their final group match but for a large part of the game, they were only creating chances from set pieces.

Ricardo Rodríguez saw a free kick heading for the top corner well tipped over the crossbar, whilst Switzerland had earlier cracked the crossbar. Eventually the equaliser came and what a strike it was.

The goal of the tournament to date came in the final 10 minutes when Xherdan Shaqiri scored a spectacular bicycle kick from 18 yards, ending Poland’s run of 351 minutes at Euro 2016 without conceding a goal.

These two teams had only scored two goals each in their three group games with Switzerland only conceding one – a penalty versus Romania.

Shaqiri ran the second half in the Swiss midfield, creating a couple of chances for teammates and causing the Polish defence some real problems in the second half.  The Stoke City man put in a man of the match performance in a losing effort.

The game finished 1-1 before Switzerland looked the better team in extra-time.  Neither side looked too attack-minded in the additional 30 minutes until the best opportunity fell to substitute Eren Derdiyok 10 minutes from time after a wonderful chipped pass into the penalty area.  The Swiss striker saw his header excellently saved by Łukasz Fabiański.

Haris Seferović had looked useless up front once again but became more involved in the game when he was out on the left-hand side.  However, the Eintracht Frankfurt striker did not take a penalty.  In fact, three of Switzerland’s five penalties were taken by defenders.

Stephan Lichtsteiner and Robert Lewandowski had scored their nations’ opening kick in the shootout before Granit Xhaka casually stepped up and blazed his effort wide.

The remaining spot kicks would all be scored giving Poland a 5-4 win and a place in the quarter-finals where they will face the winner of Croatia-Portugal later this evening at the Stade Vélodrome in Marseille on Thursday.