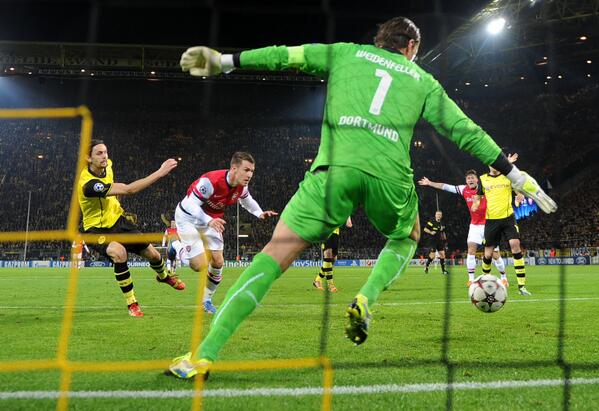 Arsenal move to the top of Group F in the Champions League after Aaron Ramsey’s header earned them a famous victory against Borussia Dortmund at the Signal Iduna Park on Wednesday night.

Ramsey who has been in the form of his life this season scored in the 62nd minute of the match. The home side pushed hard for an equalizer but couldn’t prevent the Gunners to become the first English team to win at Dortmund’s imposing Westfalenstadion.

With that victory, Arsenal have maintained their impressive unbeaten record away from home to 15 games in a row, winning 14 of them.

Credit must go to the strong defensive unit of Arsenal who thwarted Dortmund’s attack at bay. The men in yellow had failed to score at home only once in their last 60 home games. The win not only gives Arsenal the revenge for their home defeat against Dortmund a fortnight ago but their chances of reaching the knock out stages have improved considerably, although it is far from straightforward.

Arsenal players shared their joy on Twitter, here are some of them:

Lukas Podolski, the German star, who is still recovering from injury, said:

Mesut Ozil, the darling-boy of Arsenal has hailed the team-spirit and says it was amazing to win in Dortmund.

Everyone has seen our team spirit. It was amazing to win in Dortmund. Thanks to our supporters. #championsleague #arsenal

Alex Oxlade-Chamberlain, the England international who is also recovering from injury expressed his joy on Twitter:

What a win that was for us again tonight, especially going into a big game on the weekend vs United #AFC #UCL

Left-back Kieran Gibbs, also hailed the team spirit of the side:

Great team effort and spirit….what a result for us!! #AFC #UCL

The Goal scorer Aaron Ramsey saluted the team performance, he shared this: