Nicklas Bendtner returned to Arsenal starting 11 for the first time in more than two years yesterday, and the big Dane did justice to his inclusion. Arsenal manager Arsene Wenger picked him as lone striker for the Gunners’ away trip to West Bromwich Albion in the Capital One Cup tie. The Denmark striker bagged an assist in the regular time and scored a penalty in the penalty shoot-outs, earning the Gunners a place in the next round where they face Chelsea. 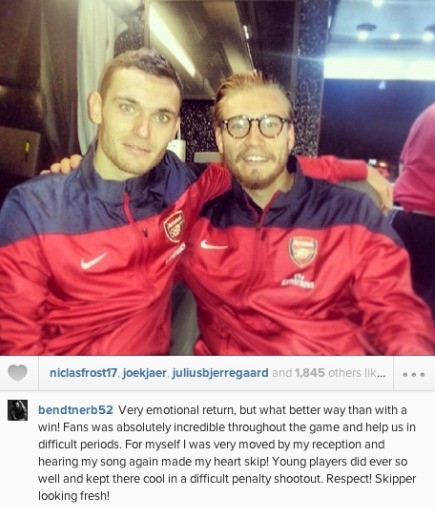 Bendtner has had a tough time in the last couple of years. He was sent on loan for two successive seasons and it became clear that his future lies away from Arsenal. But, Wenger decided to keep him in the squad after failing to land any major striker in the summer. Bendtner reflected on his return as “very emotional” and posted a picture of him with skipper Thomas Vermaelen, with a message written: “Very emotional return, but what better way than with a win! Fans was absolutely incredible throughout the game and help us in difficult periods. For myself I was very moved by my reception and hearing my song again made my heart skip! Young players did ever so well and kept there cool in difficult penalty shootout. Respect! Skipper looking fresh!”