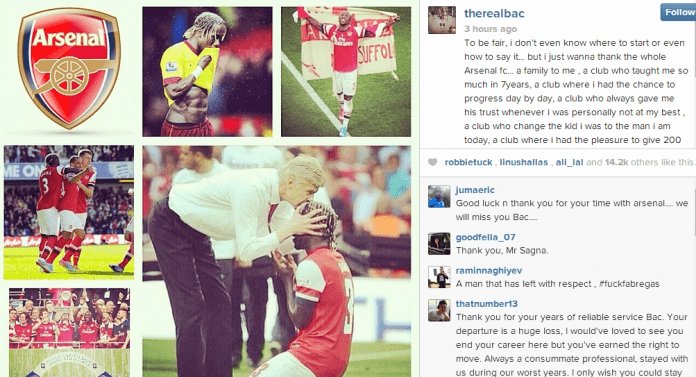 Bacary Sagna has confirmed that he will leave Arsenal and went on to thank the Gunners manager Arsene Wenger for helping him develop as a player at the Emirates.

The right-back’s contract at the North London club runs down on June 30 and will leave the club as a free agent. The French international was signed by the Gunners manager from Auxerre in 2007.

Sagna wrote on his official Instagram page and thanked Arsenal and their fans their continuous “support throughout his time with the Emirates club.

To be fair, i don’t even know where to start or even how to say it… but i just wanna thank the whole Arsenal fc…” Sagna wrote on his Instagram page.

“I wanna thank the whole staff working at the club, the fans for accepting me so fast, making it smoove for myself and my family, my team mates witch i consider my true friends today and i had a great pleasure learning with them.”

“Of course i wanna thank the coach MR WENGER… who believed in me..gave me his trust..and clearly changed my life. Now, it’s time for me to move on and one more time THANK YOU,” he concluded.

Sagna has long been linked with a move to Manchester City as the Citizens are keen on securing the services of the defender on a free transfer.

With Sagna’s departure, Wenger and Arsenal are left with Carl Jenkinson as the only other first choice right-back in the squad. The Gunners are linked with a move in signing Toulouse star Serge Aurier and Atletico Madrid’s Juanfran.