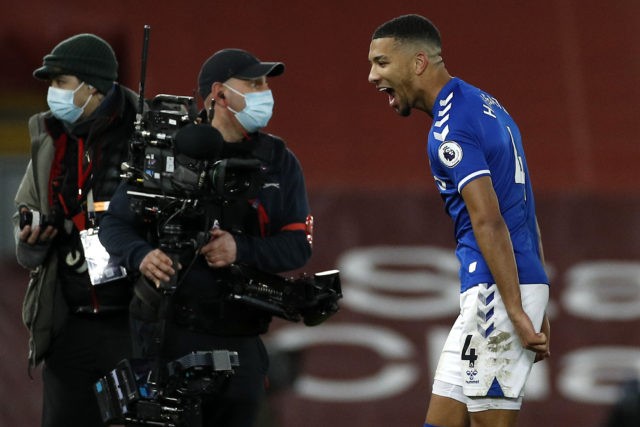 Everton registered their first win at Anfield since 1999 after beating Jurgen Klopp’s side 2-0 in the Premier League, with goals coming from Richarlison and Gylfi Sigurdsson.

Crouch in his Q/A column for the Daily Mail has suggested that Everton should get their due credit for the win while discussing Liverpool’s dramatic loss of form.

It was a fantastic collective effort from the Toffees, but there were some brilliant individual performances as well.

“So many players made that result possible,” he wrote. “Jordan Pickford was outstanding in goal, I loved the way Seamus Coleman kept Andy Robertson in check and Mason Holgate was brilliant.

He needs to be mentioned, he’s different class and is going to be a top player.”

The 24-year-old has progressed immensely under Carlo Ancelotti, and is now one of the key players at the club.

In the 5-3-2 formation, Ancelotti made sure that Everton’s defence stays resolute throughout the game against Liverpool’s fearsome front three.

Every one of them – Michael Keane, Ben Godfrey, Lucas Digne, Seamus Coleman and Holgate – were excellent against the Reds, with Keane arguably having played his best game this season.

Holgate was equally brilliant and deserves rich praise from Crouch. He is a fantastic young defender, but there’s plenty of room for him to improve.

This season, he has shown his class by adapting well at right-back when Everton were without Coleman. He is very good at tackling and has all the talent to be a top defender.