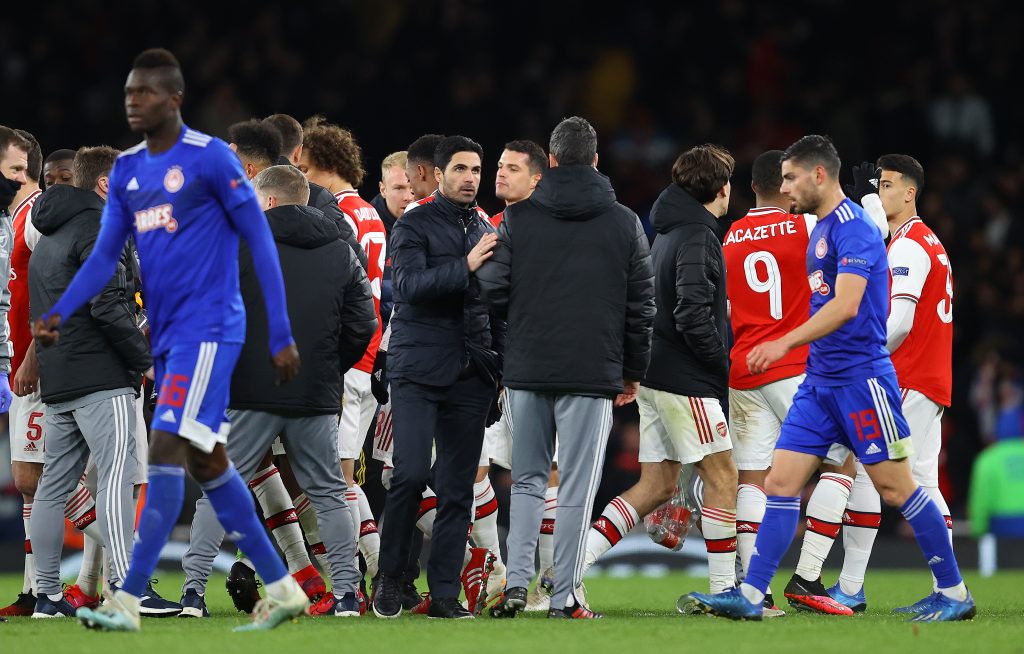 Arsenal crashed out of the Europa League last night following a 2-1 loss at the hands of Greek giants Olympiacos.

The elimination has dealt a huge blow on the Gunners’ chances of playing Champions League football next term, and missing out on the elite European competition for the fourth season running would come with a lot of consequences.

Arsenal are currently ninth in the Premier League table and are seven points off the top-four with 11 games to go.

They are currently outside the Europa League places, and qualifying for the competition next term isn’t even guaranteed.

Manager Mikel Arteta has some rebuilding job to do in the summer without a doubt, and Arsenal legend Perry Groves has urged him to get rid of nine players in what would be a major squad overhaul.

“He needs to get rid of players. I thought it would be five or six, but I think you’re looking up to about nine players. It is going to be impossible to get rid of them all in one go. This isn’t about talent, it’s not that they are not good players – David Luiz, (Shkodran) Mustafi, Sokratis, (Dani) Ceballos is going to go anyway as he is on loan, (Mesut) Ozil, (Granit) Xhaka, (Calum) Chambers, (Mohamed) Elneny and Henrikh Mkhitaryan,” Groves said on talkSPORT.

Some major exits are definitely on the cards at Arsenal this summer, and it will be interesting to see who leaves.

Getting quality players in could prove herculean, though, with the best players keen to go to where Champions League football is available.

The Gunners could also lose striking duo Pierre-Emerick Aubameyang and Alexandre Lacazette if they fail to qualify for the elite European competition next term, and it could be a whole different Arsenal squad when the 2020-2021 season kicks off.

Given the current crop of quality and promising youngsters available within the squad, though, Arsenal have a bright future under Arteta, and it will be interesting to see if the Spaniard can turn some of these kids with huge potential into world-class players going forward.

The likes of Matteo Guendouzi, Reiss Nelson, Eddie Nketiah, Bukayo Saka, Gabriel Martinelli and Joe Willock have all shown that they have what it takes to save Arsenal millions in the transfer market, and keeping them and helping them fulfill their potential is pertinent.