India
Home News pep guardiola past present and his future 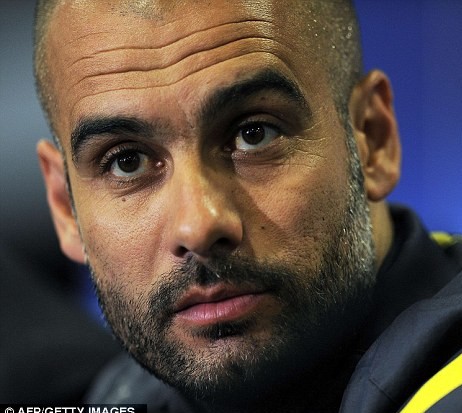 Pep Guardiola has sensationally called time on his Barcelona career following a difficult season in which the Catalans relinquished their grip on La Liga to rivals Real Madrid and were knocked out of the Champions League Roberto Di Matteo’s Chelsea.

The 41-year-old, who was appointed in 2008 and has led the Catalan club to 13 trophies, will be succeeded by his current assistant Tito Vilanova come the end of the season.

It’s fair to say his Barcelona will go down in history as one of the game’s great teams—some would argue the greatest. They’ve not only dominated, but done so with a grace and beauty in their play that has left even the most cynical in awe. The naked eye tells us that Barcelona’s play is a symphony of intuition. Yet we shouldn’t be fooled by the breath-taking aesthetics. Guardiola is an obsessive, perfectionist. The technical relationships on the pitch are the result of years of indoctrination and feverishly practiced drills.

This style of play has led Guardiola to become the most successful coach in Barcelona’s history. In his final season with the club, Barcelona find themselves seven points behind Real Madrid with four games to play. But there is still a Copa del Rey final to come at the end of the season; a win in this would mean a success rate of 14 out of 18 competitions.

On top of this, he has overseen the rise of three-time world player of the year Lionel Messi, Xavi and Iniesta, while signing Fabregas from Arsenal.

Guardiola was particularly close to Messi – describing him as “the best ever” player – while the Argentina forward suggested Guardiola was the main factor behind Barca’s recent success.

A Catalan and a product of Barcelona’s youth system, the young kid plucked from obscurity by Cruyff, Guardiola became the captain having been a member of the Dream Team – the model against which all other Barcelona teams are measured and which Guardiola’s team superseded.

Barcelona announced that Pep Guardiola was going to be their new coach, back in the summer of 2008. The team had just finished the season empty handed, 18 points behind Real Madrid at the top of La Liga, Many fans were convinced performances  would improve, but no-one could have expected quite so much change and quite so quickly. Within 12 months, Barcelona had won a unique treble: the league, the Copa del Rey and the European Cup were theirs. Much more followed.

It’s clear the pressure from managing such a huge club has taken its toll on Guardiola over the last few years.

“The reason is simple: four years is enough,” said Guardiola.

“I’m drained and I need to fill up. The demand has been very high and a manager must be strong.”

The Future for Guardiola?

The 41 year-old is expected to take a year’s break from football before re-joining the game at a new club.

The current situation in the Premiership could provide very interesting circumstances if Guardiola decided to stay in the game. I feel it’s unlikely he would manager another Spanish team in the La Liga, therefore England is the only logical move he could make.

It has been announced within the last 48 hours that Guardiola is Roman Abramovich’s number one candidate to replace Andre Villas-Boas as Chelsea’s next full-time manager. Unfortunately the Russian wants his man now, rather than in a year’s time. He intends to tempt Pep into postponing his gap year by offering him huge amounts of money.

Unfortunately, this tactic might not come off. Guardiola is very much his own man, to the extent that he famously only signed rolling one-year contracts at the Camp Nou instead of committing himself to the club long-term. And that determined streak could scupper Chelsea’s plans.

At Old Trafford, there won’t be too many names above Guardiola’s on the Glazers’ shortlist of potential successors for Sir Alex Ferguson. The only problem is shifting the man currently in the chair. Fergie has been on the brink of retirement for the past decade since announcing he was planning to call it a day when he turned 60 in 2002.

The Scot has recently declared he fancies two more years in the hot seat. Nobody at Manchester United would ever suggest Ferguson left the club on anything but his own terms, of course, but should his side have a successful season next year, he may consider quitting at the very top of his game, leaving the door open for a refreshed Guardiola to take the throne.

Furthermore, Arsenal is a possible future club for the Spaniard. Given their common philosophy of making the beautiful game as beautiful as possible, Guardiola would 100% suit the London clubs style of play. Wenger still has two seasons to run on his current deal at the Emirates, and would almost certainly want to lead his rejuvenated side into next season. But if Guardiola goes through with his plan for a break, then Arsenal might try and tempt Wenger with a role upstairs to accommodate him.

Finally, at White Hart Lane. With Harry Redknapp’s short-term future undecided to say the least, there’s no doubt that Tottenham would love to get Guardiola. Whether the Spaniard would feel the same way is debatable at best.

Spurs chairman Daniel Levy would have to pull of the sale of the century to convince Guardiola his future lies at White Hart Lane. But the club do have a promising pool of young talent – Pep is a fully-paid up member of the Gareth Bale fan club – and the potential to become a domestic and European powerhouse. Extremely unlikely, but stranger things have happened.

Why He Should Stay at Barca?

Many people would suggest Guardiola’s decision to leave Barcelona is a poor decision. It seems a week of poor results has forced him to make a rash decision regarding his future at the club. Below are a few reasons why he should stay:

1)      He won’t find better players anywhere else in the World – The Likes of Messi, Xavi and Iniesta are obviously very special. It is these players who possess the world-class ability to play the sort of football Guardiola loves his team to play. It’s highly unlikely that the Spaniard will find this calibre of players at his new club. As great as clubs like, Chelsea, Manchester United and Bayern Munich are, they don’t contain the same individual player quality as Real Madrid or Barcelona.

2)      Barcelona has arguably the best youth system in football – at his new club Guardiola won’t have the luxury of one of the world’s best youth systems to rely on. Top level players require the correct mentality to know what is required of them when they step onto the pitch. Throughout the Spaniards career as Barca manager, the clubs youth system has produced two or three players that have moulded wonderfully into the first team, with very little work required.

3)      Barcelona are very, very wealthy – Throughout his Barcelona career, Guardiola relied on great huge transfer budgets to allow him to sign the best players for his team. For example, this season he recruited Fabregas for 29 million Euros and Alexis Sanchez for 26 million euros + bonuses. With the exception of Real Madrid, Manchester City and at a push Chelsea, most clubs do not have this sort of spending ability.

4)      Finally, he won’t find a more welcoming home anywhere else in the World – When he began his managerial career for the Barcelona first team, he arrived with very little experience. Even when he quickly discarded three of the clubs best players, he was allowed to do so with little question. His connections with the club were a major reason for this. His playing career had made him a fan favourite. Wherever Guardiola goes after his ‘gap year’ he’ll be embraced by the fans for his prestige and reputation. But he won’t have the same undying devotion that the Catalan fan base gave him. He’ll go from being a regional hero to being just another manager at another club.

“I want to thank Pep with all my heart for everything he has given me personally and professionally.” – Lionel Messi

“Pep is Barca. He lives for this club. That is what differentiates him from many coaches.” – Barcelona president Sandro Rosell.

Wherever his future takes him, Guardiola will always be remembered at Barcelona for the incredible style of football played at the Nou Camp. He’s had a huge impact on the club; this has been highlighted by his amazing success in competitions against the world’s best teams.

It’s going to be a very long year for fans of football, as we wait to see where he’ll end up next, the man is a legend!