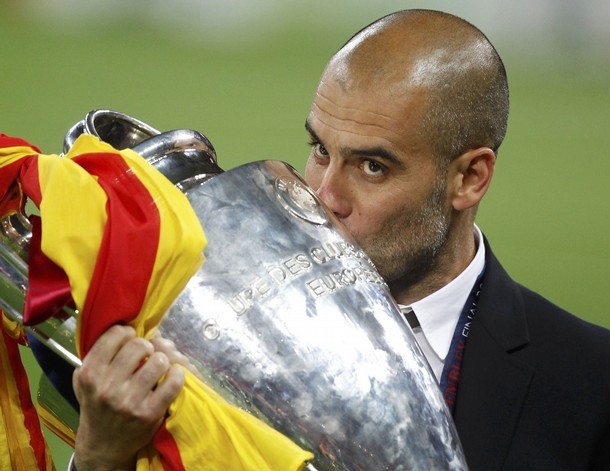 At 40 years of age Pep Guardiola has already implemented himself into one of the greatest coaches in modern history. 29 years his senior Sir Alex Ferguson, the man who sat in the opposite dugout at Wembley on Saturday night, conceded his Manchester United team were inferior to the young pretender’s Blaugrana who put on arguably, the most beautiful 90 minutes of football in a European Cup Final. With Pep’s distinguished achievements ranking up in the higher echelons of world football, what lies next for the Catalan?

When he took over the senior coaching role from Frank Rijkaard in the summer of 2008, Barca were not exactly in dire straits but they possessed an ageing squad that had seen better days. The likes of Ronaldinho and Deco were coming to the end of their time and sought pastures new, as did the club as a whole, and the introduction of youthful exuberance not just in the playing squad but also within the dugout would breathe fresh life into the club.

Pep’s three years in charge has seen him pick up three consecutive La Liga titles, two European Cups, a Copa del Rey, a European Super Cup, a FIFA World Club Championship and two Spanish Super Cups. It’s a glittering collection of silver and gold that has been racked up in three years by a man who has only been coaching for four. There are creditable coaches in the game who haven’t even got close to a haul like that, let alone win one or two cups.

Guardiola’s modesty and humility makes his achievements all that more respectable. Not one to glee in the spotlight nor pass judgment on his adversaries, he has kept his head down and stuck to the philosophy that Barca has believed in since Johann Cruyff laid out the blueprint over two decades ago.

Pep set out a standard 4-3-3 formation and built his team around the flair we have became accustomed to for twenty years in conjunction with efficiency. For all the beautiful football Barcelona play, their work off the ball had been seemingly overlooked – perhaps the superlatives to describe their attacking play had ran out and focus was drawn onto other aspects of their play. They suffocated Manchester United on Saturday by giving them no space at all to get out of their own half as they pressed up field, causing The Red Devils to hesitate in their play. It rattled the English champions and it was a major factor in their downfall. Guardiola’s pedigree as an accustomed central midfielder is mirrored by his players on the pitch. Whether it is Lionel Messi or Sergio Busquets, they will not give their opposition a pocket of space to work into. Cruyff brought in the tiki-taka play, but Guardiola implemented the potency.

The blend of the two has created already, one of the greatest sides in the history of the sport. It is impossible to judge just exactly who is the grandest eleven to play the game, but the world is currently witnessing a group of players who are going to be spoken in the same breath as Brazil’s 1970 World Cup heroes, Di Stefano’s Real Madrid, Bill Shankly’s Liverpool and Arrigo Sacchi’s Milan. They all had their pros and cons, but this Barcelona team is ultimately flawless. The vulnerabilities many felt they had at the back have been well and truly quashed as even a makeshift centre-back in Javier Mascherano displayed a maturity at Wembley that made you think he had played their all his life. It’s another sign of terrific man management by Guardiola and those affiliated have reaped the rewards.

Guardiola is blessed to have the talent he has at his disposal but the vast majority of the side that has been a part of this dominant foray in football, underwent the same education as him at La Masia and it is a testament to Barcelona Football Club.

Pep’s future at the club has been questioned as of late, disputing his well being to carry on the task in hand. He has admitted that he feels genuine strain at coaching the club due to the political issues surrounding the hot seat. Managing the greatest set of players on the planet may seem an easy feat but it is the complete opposite. Pep has also said a number of times that teams need change from time to time to freshen up their outlook – his current employers being no exception. He has been cagey on his future in the last year, especially with Sandro Rosell being elected new president last June. Nevertheless why would you contemplate leaving this set of players for whatever reason? Yes he has achieved so much at the club but the job is not yet complete.

He has an opportunity to implement this side as the greatest to have ever played the game. Many are under no illusions that he has already achieved that feat but with them now being reigning European champions, they need to do something no other club has done and that’s retain the Champions League. Since its transition from the old European Champions Cup in 1992, no team has ever successfully defended their crown. Milan were the last team to do so before the transition in 1990 and are regarded one of the finest outfits in the sports history. If it was not for Internazionale and Jose Mourinho last year stifling Barca, who were Champions League holders at the time, the European Cup they picked up at Wembley on Saturday could have been their third straight crown – how conclusive would that have been in them being regarded as the greatest ever?

Guardiola has another opportunity to take a side as reining European Champions and make them immortal by retaining their crown in Munich next May.  That is a challenge in itself but who would bet against it? Pep would also join the late great Bob Paisley in becoming only the second manager to lift three European Cups – a chance to get one up on nemesis Jose Mourinho who is striving to do the same at Real Madrid.

A European Super Cup and of course the World Club Championship in the fall await the Blaugrana as a reward for winning club football’s Holy Grail. If Barca do end up winning them, not only is it two more highly regarded honours added to their bulging cabinet, but their coach will overtake Cruyff as the clubs most successful coach – doing it in just three and a half years. What a staggering achievement that would be and as things stand, it looks inevitable he will do so by the end of next season.

His plans for the squad this summer will be one of interest. There is always room for improvement, even for a side like Barcelona and Guardiola realises that. He will continue to bring through the youth and the emergence of the likes of Thiago and Jeffren will see them push for starting positions next season. Real Madrid will seemingly be stronger and will perhaps present a sterner title race as Pep looks to equal Cruyff’s record of four straight league championships.

The world is there for the taking for Guardiola and his Barcelona side. Immortality awaits.