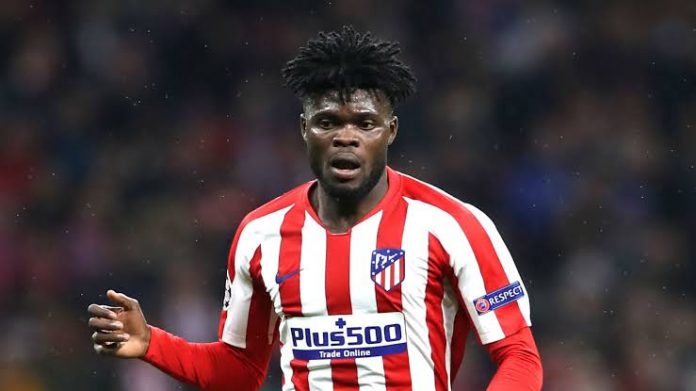 Only a true Gunner can attest to the consistent descriptions around the need for ‘the new Viera’ at Arsenal. Since the Frenchman moved on from North London after winning the FA Cup in 2005, there seems to be no perfect replacement for the icon, even after a decade and a half later.

The closest who was tipped for similar greatness since then was a young talent who goes by the name Abou Diaby. But of course, he failed to meet expectations.

But all of that could soon change though, as the North London club hopes to secure the signature of midfielder Thomas Partey from Atletico Madrid before the summer transfer window closes in two weeks.

The deal may have received a fresh boost as Lucas Torreira is now set to leave North London to join Partey’s current club, Atletico Madrid. Reports claim the Spanish side have reached personal terms with the Arsenal midfielder as they plan for the 24-year-old to be a replacement for Thomas Partey should he leave in the summer.

But could the Ghanian sensation be the new Patrick Viera at Arsenal? That’s yet a mystery.

However, with his imposing physicality, commanding midfield presence, and intelligent technical play, it is believed that the 27-year-old is capable of filling the consistency gap that’s been lacking at the Emirates for many seasons.

Although Arsenal has been keen on signing Partey from Atletico since the opening of the Transfer Window, the La Liga giants have remained adamant that the midfielder will not be leaving for any fee lower than his £45m buyout clause.

Following Atletico’s interest in Torreira, the Gunners had tried to include the Uruguayan in a player-plus-cash deal for Partey but Atletico refused that proposal, requesting that negotiations for Torreira should be done separately as they are only open to talks over a loan move.

But the need for Partey at the Emirates is of greater significance than Atletico’s need for Torreira at the Metropolitano. Whilst another one of Arsenal’s targets, Houssem Aouar could possibly offer more creativity in the midfield, Partey tends to offer more consistency, depth and strength.

Still, the Ghanian midfielder is not so much without creativity having completed 63.2% of his dribbles last season and a pass completion rate of 84% last season.

Partey, like Viera, is almost violent in the way he picks up the ball from central midfield and drives forward. His unrivalled combination of intelligence, consistency and transformative play is surely irresistible for Arteta giving him an edge over other choices in his plan for the club.

The only challenge is whether Arsenal is willing to pay the £45m release clause or not.