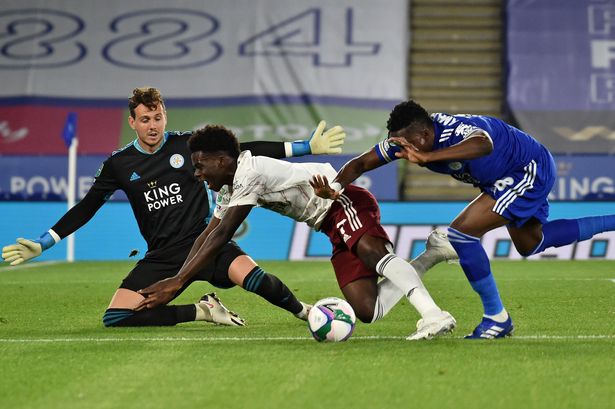 Arsenal are now through to the fourth round of the English League Cup, thanks to a 2-0 win over Leicester City last night at the Emirates.

What can we say? Well, it is interesting to note that the team showed experience, all things considered, with the likes of David Luiz, Nicolas Pepe, Bernd Leno, and Mohamed Elneny all in the starting eleven.

The team also had five academy graduates in the starting lineup. These include Ainsley Maitland-Niles, Bukayo Saka, Joe Willock, Reiss Nelson, and Eddie Nketiah – and on a personal note, I think these guys were the real stars of the game.

Importantly, Nelson was lively, but Saka was even livelier. The youngster who had put in a very impressive display to win Arsenal’s Man of the Match award in the cup game is not guaranteed to start against Liverpool on Monday.

Following his outstanding performance against Leicester, 42% of the fans voted for Bukayo Saka in Arsenal’s post-match poll. That made him a clear winner, with Reiss Nelson coming second with 20.4% votes.

The 19-year-old star put in a particularly impressive first-half display, one which probably should have led to a few goals. He should have had a penalty also when he was obviously bundled over in the box. The referee thought otherwise, but if available, VAR certainly would have given it.

Then there was another lovely piece of play on the left flank that only needed a touch on Saka’s cross.

All through the match, Saka’s clever touches and passes kept the team dominant in attacking position. Let’s not forget how well he played the last time out either, playing a pivotal role in the 2 – 1 win against West Ham.

However, the concern is in the fact that Saka’s former academy teammate, Ainsley Maitland-Niles seems to have been performing consistently in the big games, at left-wing-back.

The 23-year-old was Arteta’s first choice in all three of the most recent wins against Manchester City, Chelsea, and Liverpool.

Only one of them can start when Arsenal meets with Liverpool on Monday and I think Maitland-Niles is still the favourite to start in the left position while Hector Bellerin starts on the right.

Saka is definitely not going to displace Pierre-Emerick Aubameyang or Willian/Nicolas Pepe upfront as it stands. And while he is gradually proving his quality at every opportunity, I think his fellow countryman looks to be the better option to start in the left-back position. It’s sure going to be a tough decision for Arteta.