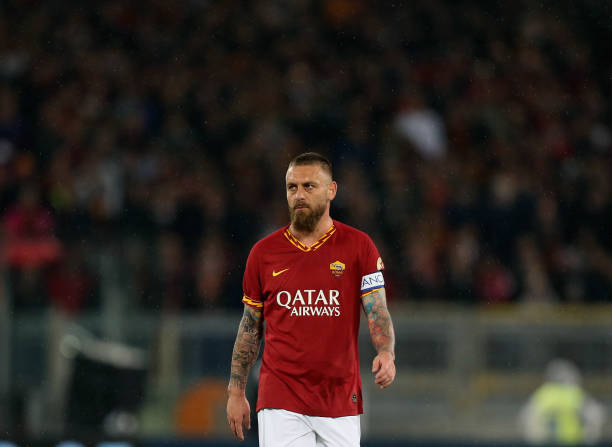 Arsenal have made three summer signings so far, bringing in teenage Brazilian striker Gabriel Martinelli from Ituano, Spanish midfielder Dani Ceballos from Real Madrid on a season-long loan and snapping up French centre-back William Saliba from Saint-Etienne – where he will remain on loan next season.

However, manager Unai Emery will hope to get more deals over the line in order to challenge for silverware and a top-four finish next season.

From the look of things, though, that might not be possible as Arsenal don’t have enough funds to spend on transfer this summer.

The Gunners could have no choice than to land more loan deals and free signings, but they appear to have missed out on a trick after AS Roma legend Daniele De Rossi left Europe for South America as a free agent.

The 36-year-old has joined Boca Juniors after 18 years with the Serie A giants, but Arsenal legend Ian Wright was keen for the North Londoners to snap him up early last month.

The former striker expressed his views and ‘transfer advice’ for the Gunners thus on Twitter:

Arsenal need to bring in De Rossi from Roma ! We’ll get 15 games out of him, it won’t cost hardly any money, and the experience he could pass on to the likes of Willock and the other youngsters could be invaluable and money well spent. ?

The club’s recruitment team clearly never thought about it, or did and discarded it.

De Rossi might have been keen to finally play in the English top-flight, and chances are he would have done pretty well.

While Arsenal aren’t short of options in the defensive midfield department, they could do with the experience and charisma of the Italian in their dressing room.

However, the World Cup winner should hit the ground running over there, and Arsenal appear to have missed a trick.