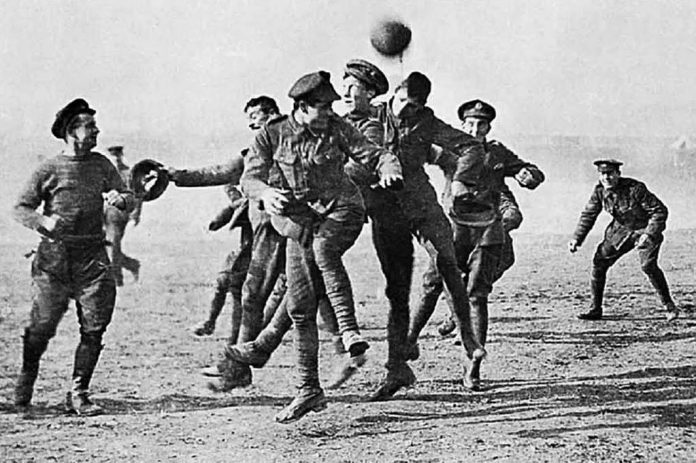 On this day in 1875, Scottish clubs Heart of Midlothian and Hibernian contested the first ever Edinburgh Derby, with Hearts winning the tie by 1-0.

The two Edinburgh based clubs form one of the oldest rivalries in football. Although, sectarian divide has largely subsided in the 21st century, the hatred between the two clubs goes beyond football. Hibs identified with Edinburgh’s Irish catholic population while Hearts were largely pro-British.

Nearly 150 years have passed but this fixture still remains as one of the favourites in Scottish football.

On this day in 1914, the First World War was paused for a while so that British and German soldiers could have a friendly game of football.

The battle in the Western Front was as fierce as anywhere during the course of the war. On Christmas Day, however, the soldiers dropped their weapons to revel in the yuletide spirit. A recently uncovered letter from a British Staff Sergeant named Clement Barker of the 1st Battalion Grenadier Guards provides conclusive proof of the events that took place on this day.

Barker describes in the letter that the truce was achieved after a lone German messenger walked across ‘no man’s land’ on Christmas Eve to broker a temporary peace treaty.

The letter, discovered years later by Barker’s nephew read: “…a messenger come over from the German lines and said that if we did not fire Xmas day, they (the Germans) wouldn’t do so in the morning (Xmas day).

“A German looked over the trench – no shots – our men did the same, and then a few of our men went out and brought the dead in (69) and buried them and the next thing happened a football kicked out of our Trenches and Germans and English played football.

“Night came and still no shots. Boxing day the same, and has remained so up to now…

“We have conversed with the Germans and they all seem to be very much fed up and heaps of them are deserting.

“Some have given themselves up as prisoners, so things are looking quite rosy.”

On this day in 1937, Chelsea hosted Charlton Athletic at Stamford Bridge amid heavy fog.

Little did Charlton goalkeeper Sam Bartram know that the game had been abandoned in the second half because the dense fog was affecting the players’ vision. He stood there, minding the posts, well after the rest of the players had made their way into the dressing rooms.

“What on Earth are you doing here?” asked a confused looking policeman to the meticulous Bartram. “The game was stopped a quarter of an hour ago.”

“When I groped my way to the dressing room,” Bartram later wrote, “the rest of the Charlton team, already out of the bath and in their civvies, were convulsed with laughter.”

We have all been there.