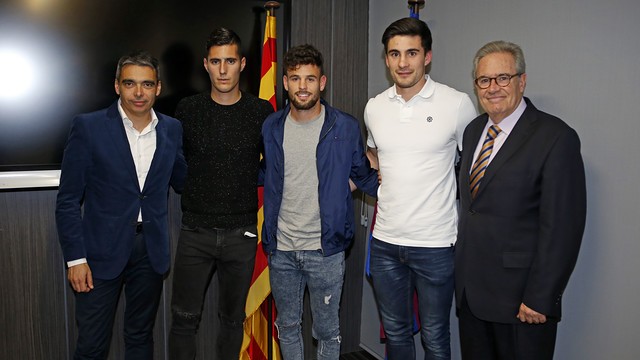 Barcelona have terminated the contract of Sergi Guardiola, hours after announcing him as their new signing after finding out the player’s history of strong anti-Barcelona sentiments. Guardiola signed along with Moises Delgado and Xemi for the club’s B team, which currently play in the Spanish third tier, but has now seen his new contract at the club terminated after Barcelona decided his place at the club was no longer tenable.

The Catalan giants have removed the page wherein Guardiola’s signing was announced, and have replaced it with a new report announcing the signings of Moises and Xemi with a note at the end. The note read: “FC Barcelona has decided to terminate the contract signed with Sergi Guardiola, after finding that he had published offensive tweets about the club and Catalonia.”

Guardiola’s tweets, dug up from 2013, had phrases like “HALA MADRID” and “puta catalunya” which translates to “Let’s go Madrid” and “F*** Catalonia”. Such strong sentiments expressed against Barca forced them to reconsider their decision to sign the player in the first place and the club were quick to act in a manner that saw Guardiola having the shortest of stays at the Spanish champions.

Barcelona, who have been unable to register new players for the past two transfer windows, have already got in on the act of bringing in new players and with their B team in the lower reaches of the Spanish footballing ladder, reinforcements are aimed at bringing them back up to the more competitive Segunda Division after getting relegated last summer.

Guardiola, who has no relation with ex-Barcelona player and manager Pep Guardiola, has removed the tweets and made his account private. Quite how a person’s past can come back to haunt him can be best explained by the 24-year-old’s current plight. The player, however, has since been quoted as claiming his innocence.