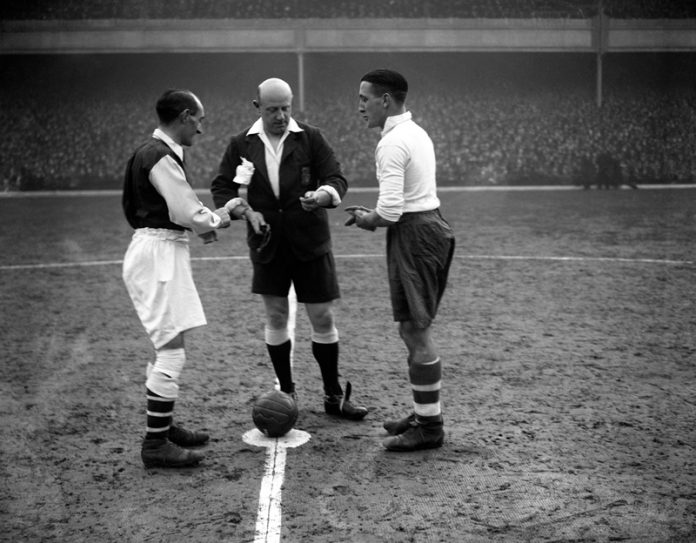 The Premier League returns this weekend with the highly anticipated North London Derby between Arsenal and Tottenham Hotspur at the Emirates taking centre stage.

The first recorded clash between the two was in 1887 in a friendly at the Tottenham Marshes in Haringey. The match was abandoned fifteen minutes before the end due to ‘bad lighting’ with Spurs leading 2-1. This was the beginning of a century old rivalry that has often produced some of the best games in English football history.

So ahead of the epic clash this weekend, we take a look at five of the best North London Derbies to have ever been played.

We are going old school with this one. Arsenal’s famous 6-0 victory over Spurs at White Hart Line is still the biggest margin of victory in a North London Derby.

Ted Drake and Alfred Kirchen each scored a brace to send Spurs on a downward spiral.

The result perfectly mirrored the contrasting fortunes of the two clubs that season. The Gunnners would go on to become champions while Spurs would be relegated which would be te beginning of a 15-year hiatus from the English top flight.

There have been three 5-0 results in North London Derbies with Spurs accomplishing the feat on two occasions (1911, 1983) while Arsenal managing it just once.

Remarkably, White Hart Lane witnessed all three results. Arsenal’s win in 1978 still haunted most of the Spurs faithful but revenge was finally served five years later. Marc Falcao scored a brace of volleys after Chris Hughton had drawn first blood. By the time Alan Brazil made it 5-0, the Gunners were ousted root and stem.

It would be unfair if we did not mention this nail biting, edge of the seat affair between the two sides at the Emirates in 2008.

Fast paced, dynamic, end to end, this game epitomised the Premier League’s reputation as the most entertaining league in world football. Former Gunners youth prodigy David Bentley gave Spurs the lead with an outrageously brilliant volley. Mikael Silvestre equalised before half time to make it 1-1 at the break.

William Gallas and Emmanuel Adebayor both scored after the interval to give Arsenal a healthy 3-1 lead. Darren Bent pulled one back for Spurs but Robin van Persie’s strike in the 68th minute made it 4-2 to Arsenal.

Jermaine Jenas scored in the 89th minute before Aaron Lennon’s stunning equaliser in injury time secured a 4-4 draw for Spurs.

White Hart Lane often bore witness to some of the best matches in this particular fixture and this see-saw of a game was no different.

Arsenal had seen their 49 game unbeaten run in the Premier League been broken by Manchester United which was followed by two disappointing draws against Southampton and Crystal Palace.  Spurs on the other hand were on a shambolic run of games themselves.

Noureddine Naybet put Spurs ahead with a volley before Thierry Henry levelled just before half-time. Lauren’s penalty gave Arsenal the lead in the second half and Patrick Vieira added a third around the hour’s mark. A Jermain Defoe strike restored Spurs’ hopes for a comeback but Freddie Ljungburg once again restored Arsenal’s two goal lead. Ledley King pulled yet another goal back for his side but Robert Pires was having none of it. The final goal of this nerve-racking game came from Freddie Kanoute.

Chants of this game can still be heard across the terraces of the Emirates. This match was as sweet for Arsenal as it was embarrassing for Spurs.

The Gunners were invincible and required only a draw to clinch the Premier League title. Spurs would have loved to be the first team in the 2003/04 season to break Arsenal’s momentum. The mere thought of their bitterest rivals lifting the trophy at White Hart Lane brought tears to the eyes of the Spurs faithful.

Arsenal, however, had no intentions for a draw. They took the lead after just three minutes after a run from Henry from his own half ended up with Vieira tapping home the ball past Spurs keeper Kasey Keller.

Yet another beautiful counter attack produced a goal from Robert Pires. Arsenal had victory in their sights, the Premier League trophy almost guaranteed. A Jamie Redknapp strike kick started a spirited display from Spurs who could not accept anything less than a win. Robbie Keane converted a penalty late in the game to make it 2-2.

Arsenal persevered in the final few minutes to secure their draw and of course, the big trophy.