Benfica’s Nicolas Gaitan should get at least one award, from anywhere, for being the protagonist of the greatest transfer saga ever created in the history of football. Never before a transfer saga ran for four years. Will his love affair with Manchester United ever materialise?

Like every other transfer window, Nicolas Gaitan has been linked inevitably with United this summer as well. Portugal media kept us feeding the information (courtesy his agent) that United had agreed a verbal agreement with Gaitan. 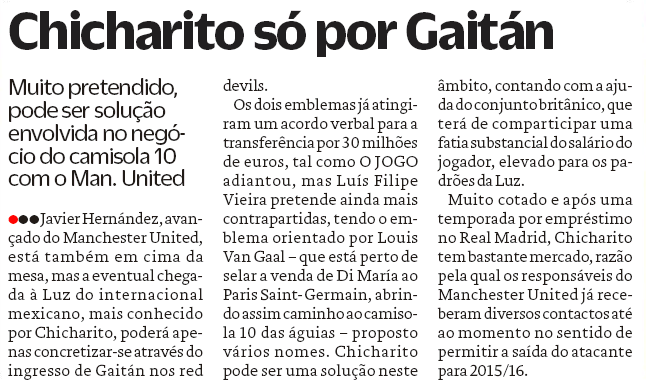 Portugal media were convinced that Gaitan will walk into Old Trafford, once Angel di Maria moves away from United. Di Maria is likely to join PSG in the coming weeks, but the chances of Gaitan joining United are very slim.

If the reports are to be believed, United are planning to sign Pedro Rodriguez from Barcelona. Anyway, Portugal newspaper O Jogo claims Gaitan would join United for €30m (at least they’ve been consistent with the price), once Di Maria leaves the club.

United, however, are not willing to pay that amount, while on the other hand Benfica are looking to sign a player on loan to sweeten the deal. Javier Hernandez is just one of the many names offered to Benfica. The Mexican would need to accept a pretty large pay cut to join them on a permanent basis though. Let’s just enjoy this transfer circus. At least, it gives us something to laugh about in the end.