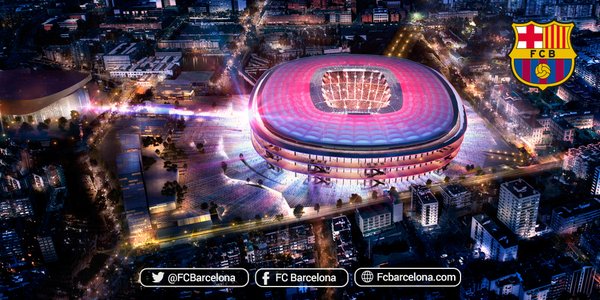 It’s official. Barcelona have revealed the concept imagery of their plans to expand the Camp Nou. The Catalan giants plan to increase the sitting capacity at the ‘New Camp Nou’ to 1,05, 000.

The European champions revealed the first images of how the stadium will look like.

The project has been awarded to joint partnership of Nikken Sekkhi and Joan Ramon Pascual i Arquitectes.

A jury of five members of the club, have taken this decision after a long review process of the proposals submitted by a technical committee, taking into consideration the guidelines, bidding specifications, criteria and requirements set by the club.

The council was represented by its assistant city planning manager, Aurora Lopez.

In June 5, 2015, Barcelona released the International Architectural Tender to select the projects for the new Camp Nou and the new Palau Blaugrana.

It was run over two phases and was conducted in collaboration with the Col-legi d’Arquitectes de Catalunya. 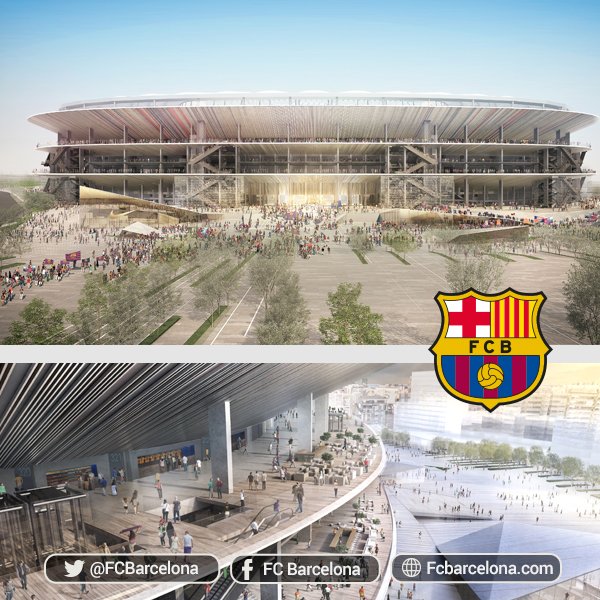 The Nikken Sekkei + Pascual i Ausió Arquitectes proposal stands out for being open, elegant, serene, timeless Mediterranean and democratic.

It is also notable for its relationship with the environment, providing depth, creating shadows and making members the stars of the facade and of the open area at all times. The proposal presents a very subtle attempt to intervene in the environment to facilitate circulation and achieve diverse urban usage in the Barça Campus and guarantees a clear and safe construction.

The Japanese company has been around for over 100 years, and it is considered to be one of Asia’s leading architectural and engineering companies.

The team has been working with the Catalan studio headed by Joan Pascual and Ramon Ausio, who have a proven track record of working with Barcelona’s previous architectural designs.

Let me make it very clear:

This new construction is just an expansion of the Camp Nou, however, due to its massive re-structural plans, it would look a completely different stadium both from the inside and outside.

The proposal includes an improved accessibility, mobility, sustainability, modern amenities, and designed to give the audience a different experience of watching a football game.

a) The Camp Nou itself

The stadium will now hold a seating capacity for 1,05,000 fans. A new, first tier terracing would improve better viewing, the second tier will remain the same, while the third tier will be expanded.

It means some 10% of season ticket holders would be moved, but it comes with a better view of the pitch.

Improvement in corporate service – design of new ring of boxes and restaurants overlooking the pitch, ‘super boxes’ and other VIP services – have been taken into consideration.

Outside the stadium, the New Camp Nou will have more parking space. Escalators and lifts will be used to reach the third tier, and the structure will be designed in such a way that the stadium receive more daylight.

When the New Camp Nou construction works will be finished?

The work on the new Camp Nou would begin in May, 2017. The club is expecting to finish the construction works within February, 2021. Put simply, it would take around four years for completion.

The construction work will not disrupt the preparation for any season. The club are expecting to complete throughout three and a half football seasons.

“The work on the exterior will largely be done while the stadium is being used for matches, while the work on the terraces will be done in the summer, thus minimising the inconvenience caused to spectators.”

The best part is:

Barcelona’s first team will be able to continue playing at Camp Nou. There will be as such no major effect on ground capacity.