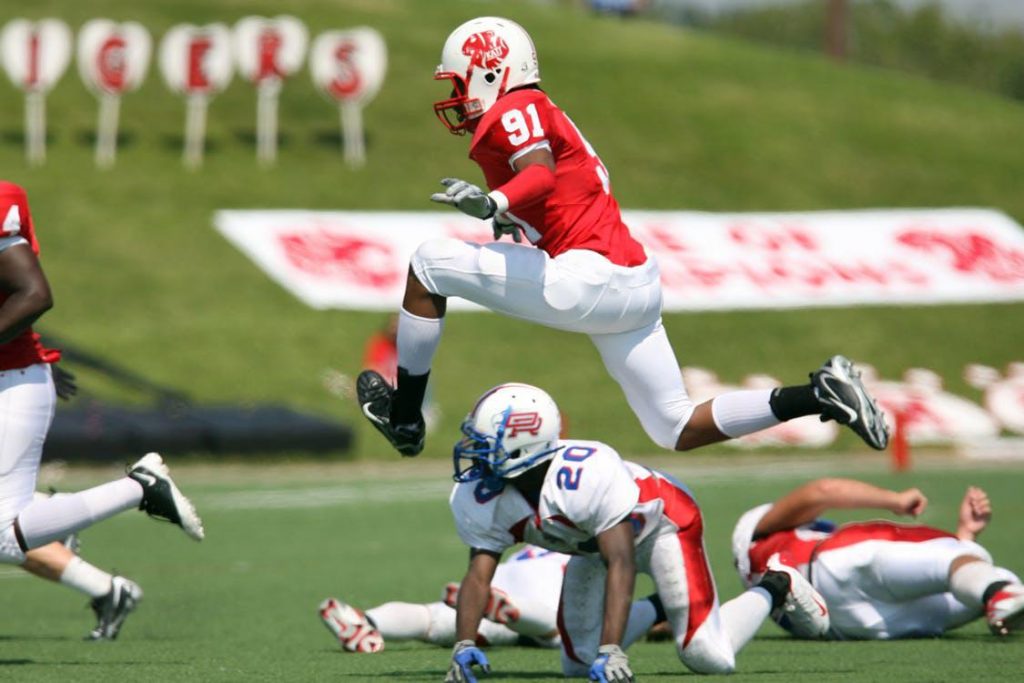 NCAA football returns tomorrow, and, with a top slate of games to look forward to from Thursday to Saturday, our expert details the best NCAA Week-12 Picks. Plus, find out how you can claim a $2,500 welcome offer at BetUS.

Houston Cougars look to keep their undefeated AAC Conference record going on Friday when they take on the visiting Memphis Tigers.

The Tigers have been the epitome of inconsistency in the AAC to date. Ryan Silverfield’s team is at 5-5 and has yet to string together two consecutive wins this year.

A fortnight ago, Memphis upset SMU but followed that up with another below-par performance a week later against Carolina, losing 30-29 in overtime. The Tigers defense is struggling and has allowed 575-yards of airmail in its last two games.

Houston, on the other hand, stuffed Temple 37-8 last Saturday to retain the top spot in the division with a 9-1 record. QB Clayton Tune boasts a 69% completion percentage and 295.6- YPG over the last five Cougars games and has thrown 14 TDs and 0 picks in that same span. His premier WR option is Nathaniel Dell, who was unusually quiet last time out but can still lay claim to 865-yards and eight TDs this year to date.

Houston hasn’t lost since that opening day defeat to Texas Tech and has been putting up serious points in recent games. Besides that crushing win against Temple, the Cougars have also laid waste to Grambling St. (45-0), Rice (44-7), Tulane (45-22)… the list goes on!

Anything can happen in a game of football, but we don’t envisage the Tigers below par secondary being able to contend with Houston’s above-average passing attack.

Bet on the Cougars to win and cover the -8.5 spread at BetUS

Clemson Tigers have won three conference games in a row but have still been largely unconvincing, relying on a few fortunate turnovers to defeat Florida State in their last outing.

Clemson’s ground game has at least begun to improve – Kobe Pace now averages 5.3 yards per carry. But, in this post-Trevor Lawrence era, the Tigers passing game is still way below-par. Incumbent QB DJ Uiagalelei is connecting with just 54% of his passes and has just eight TDs to seven interceptions on the year, which is a huge drop off from the kinds of numbers Jaguars QB Lawrence was posting a little over a year ago.

Wake Forest QB Sam Hartman, on the other hand, has been in exceptional form all year and is making a solid case for an early-mid-round selection at the 2022 NFL Draft. Last week against NC State Wolfpack, Hartman did throw three picks, but also managed three TD passes and 290-yards in a 45-42 win. On the year, Hartman now has 3,163-yards, 30 TDs (5th in NCAA) to just eight picks, and is by far the best QB that will line up under center on Saturday.

Prediction: Wake Forest on the moneyline

Alabama haven’t been at their imperious best this season but are still just a couple of wins away from yet another SEC Championship appearance.

QB Bryce Young boasts 79% passing accuracy and has chalked up 3,025-yards, 33 TDs, and just the three interceptions on the year so far, and his main targets out on the flanks, Jameson Williams and John Metchie III have combined for 1,750 of those yards and 16 TDs. In short, you don’t want to face Alabama with a weak secondary!

That said, without Najee Harris (now at the Pittsburgh Steelers), the Crimson Tide’s rushing offense hasn’t been anywhere near as productive as it was, and, up against a decent Arkansas’ run defense that hasn’t conceded more than 135-yards on the ground in over a month, this could prove to be a slightly tougher game than some predict, especially seeing as the Razorbacks come into the game off the back of three consecutive wins.

With regards to the spread, QB K.J. Jefferson and the Razorbacks have lost just once by +21 points and that was vs Georgia some six weeks ago and they have won four and lost just once since then…

As good as Alabama always are, this spread looks inflated to us.

Prediction: Alabama wins but not by enough to cover the huge -21.0 spread

NCAA Betting Tips: Get a $2,500 Deposit Bonus at BetUS ahead of the Week-12 games

BetUS is offering a 125% first-time matched deposit bonus that’s worth up to $2,500 to anyone that signs up with the sportsbook in time for this week’s main slate of NCAAF Week-12 games.