Could this be yet another transfer failure for Manchester United? Well, nothing is concrete at the moment, and we can only speculate about the story.

According to reports from Spain today, Barcelona have already made contacts with the agent of Borussia Dortmund forward Marco Reus over any possible transfer.

Mundo Deportivo on 11th May first published the story that Barcelona are interested in the highly rated German star.

James Ducker of The Times published a story last week, where he claimed that Manchester United manager David Moyes is keen to bolster his attacking department with the purchase of Marco Reus in January and is ready to sell Shinji Kagawa as a part exchange offer. The contract situation given in the article caught our attention, and we covered the story in details here.

German newspaper Bild reported, Reus indeed has a release clause of €35m but it will be only active after 2015. Further, Dortmund are looking to increase his salary from €4.5m/year to €6m/year to fend off interests from other clubs.

Barcelona are well aware of his contract situation and hence have taken a round-about turn to conclude this deal, via the player’s agent.

On Thursday night in a program called ‘Efectivament’ by Esport3, directed by Lluís Canut, a contributor of Mundo Deportivo, an information was provided that Volker Struth, agent Marco Reus, has been in contact with sports sporting director of FC Barcelona, ​​Andoni Zubizarreta. The agent on its own initiative is keen to sell his client to the Catalan club, as per the report. 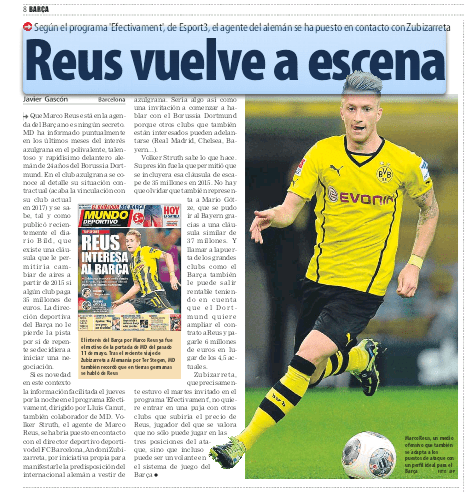 Barcelona however are not keen to enter into the bidding war with other clubs as that would raise the price of the player, who can play in all the three attacking positions.

As we already said this is just a mere speculation. The contract situation of Reus is very intricate and it will be very difficult to negotiate a deal at the moment. It will be interesting to see, whether any club, be it Manchester United or Barcelona make any formal approach before Dortmund increase the player’s salary and forcing others with a hands off warning. And we all know how David Moyes frustrating failed in the summer transfer window to lure any big names at Old Trafford, despite United being linked with so many world class players.