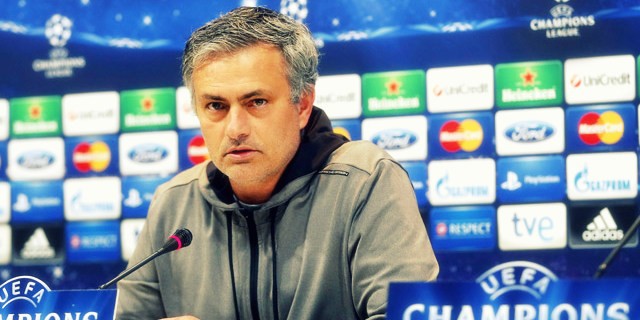 Former Chelsea boss Jose Mourinho has all but confirmed his return to West London, following Real Madrid’s exit from the Champions League.

Mourinho was asked directly whether he would be the manager of the Spanish giants next season and he replied ‘maybe not’ which is the biggest indication yet that he could be on his way back to the Premier League.

Mourinho has seemingly been at odds with higher powers at Real Madrid for months and every time he’s appeared publicly, he’s seemed unhappy and desperate to get away from the club.

The club’s president Florentino Perez reportedly told him that if he stayed on as the manager for the 2013/2014 season then several first team stars would be sold, forcing him into a massive re-build.

The Portuguese coach has stated he wants to be at a club and in a country where he is loved and in return loves his situation, previously suggesting that the blue of Chelsea runs through his veins. He said following the 4-3 defeat on aggregate at the hands of Borussia Dortmund:

“I know I am loved in England. I am loved by some clubs, especially one.”

Mourinho has so far been very reluctant to give anything away in relation to his future, which is unsurprising as it’s not impossible that he has an agreement with Chelsea to keep his return under wraps. Mou added:

“I know that in England I am loved by the fans and by the media, which treats me in a fair way.”

Chelsea themselves have given nothing away in terms of their choice of manager to replace interim boss Rafael Benitez at the end of the season but if it’s confirmed as Jose Mourinho, then the two Manchester clubs will have a huge challenge to retain their dominance in English football.