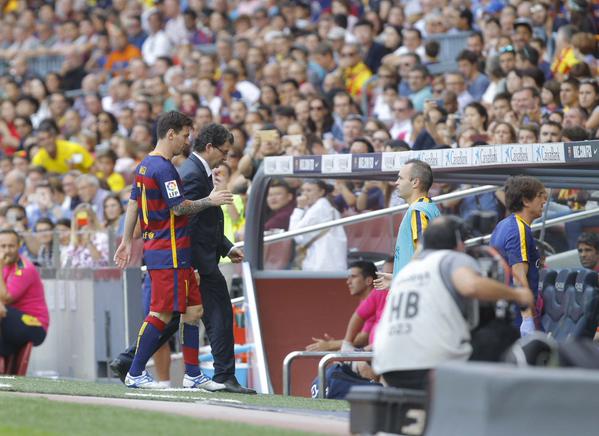 Barcelona superstar Lionel Messi could miss actions up to eight weeks, after suffering a knee injury against Las Palmas.

Watch this space for all the latest news, updates and possible return date.

I have some positive news on Messi’s injury for the Barcelona fans.

According to reports from Catalan newspaper Sport, the Argentine striker began his rehabilitation yesterday.

Although for the first few days, he needs complete rest and will not perform any major activity during the first week of recovery. 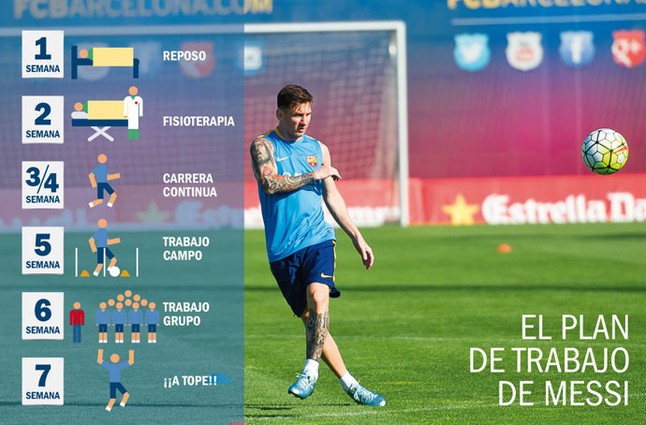 Doctors have recommended the use of crutches, and after one week he will be treated by the physiotherapists.

Physiotherapy is key for his recovery.

It will allow the injury to heal, reduce the inflammation and if all things go well, Messi might start playing football (light practice) from the fifth week.

Barcelona doctors fear that Messi won’t return to the training ground before the sixth week. It is a common injury among the players, and there’s nothing to worry about.

Luis Garcia, a well-known physio expert from Argentina, will be travelling to Barcelona to check the extent of his injury and help him in his recovery.

Will Messi return against Real Madrid?

Well, that’s the biggest question everyone at the club is asking at the moment.

The doctors are hopeful are Messi will be fit to play within seven-to-eight weeks.

Check the list of the games Messi could miss during his recovery: 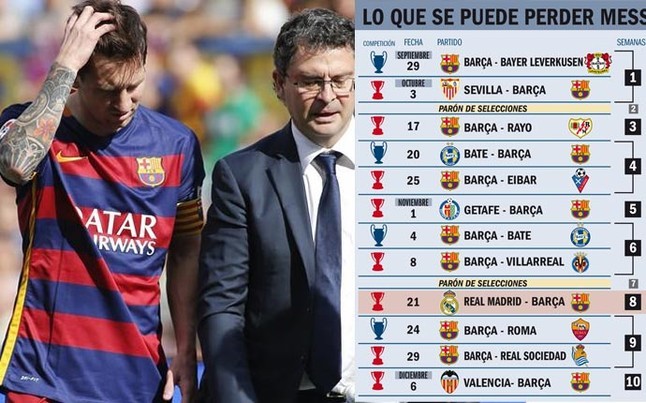 Furthermore, he could miss two Champions League games against Bayer Leverkusen and Roma.

Messi hurt his knee within just three minutes of the match, after shooting under pressure from defender Pedro Bigas Rigo.

He returned to the pitch but he couldn’t continue, and within few minutes he was subbed, with Munir El Haddadi coming on his place.

Barcelona eventually won 2-1, with Luis Suarez netting a brace, but it is the injury of Messi that remains a huge concern for the Blaugrana manager.

The club has issued a statement: “Messi has a torn lateral collateral ligament in his left knee. He’ll be out for approximately seven to eight weeks.”

The week has gone from bad to worse for Barcelona.

On Wednesday, they lost their 100% record, after losing out 4-1 against Celta Vigo at the Estadio de Balaidos.

Also, off pitch issues like Neymar facing allegations of tax evasion has also grabbed the headlines.

Messi in last 7 years only once suffered an injury lasting longer than 3 weeks. In 3 whole seasons had not a single injury

Messi out for 6-8 weeks after his injury. Sad news for everyone who loves football — Jan Aage Fjortoft (@JanAageFjortoft) September 26, 2015

Messi has left hospital and now we will have to wait for the official note of the club on his injury. He limped and seemed a bit worried — Guillem Balague (@GuillemBalague) September 26, 2015

According to Guardian writer Sid Lowe, Barcelona are hoping that Messi will return before the Clasico. But, there are high chances that he may not make it. If not, he would miss the two crucial games – Sevilla and Real Madrid.