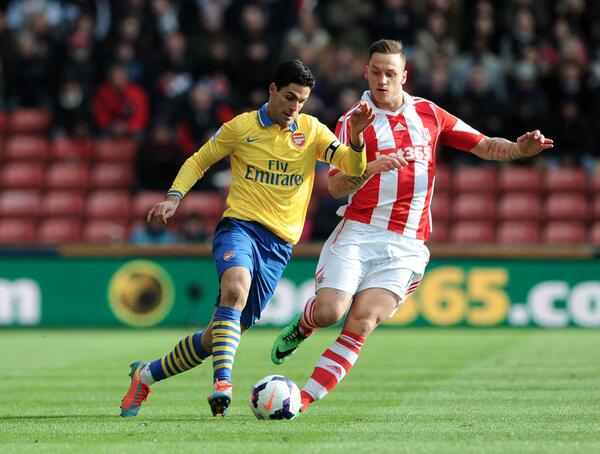 Arsenal manager Arsene Wenger said his side has suffered a massive setback in their quest for the Barclays Premier League title, after suffering a 1-0 defeat against Stoke City at the Britannia on Saturday afternoon.

The Gunners failed to create enough clear cut opportunities as they struggled to match the physical playing style of Stoke. After a frustrating and lacklustre stalemate first half, the home side took the lead in the second half with with Jonathan Walters’ 75th minute penalty securing a crucial three points for the Potters.

Arsenal defender Laurent Koscielny was penalised for a handball in the box, which looked pretty harsh to be honest.

Wenger showed his frustration after the at the referee’s decision to award the penalty and admitted that his side was punished due to the failure in creating more chances.

“It’s not slightly worrying, it’s a big worry for us to lose a game like that. It’s a massive setback,” said the Gunners boss as quoted by talksport.

“To win a title, you have to perform when you’re expected to perform, it’s a simple as that.

“We were not fragile, our defensive performance was outstanding, Stoke created hardly anything at all. But our offensive game was poor by our standards, we didn’t create enough.

“However, I think we were unlucky to lose the game.

“There’s is no intention from him at all, but of course we can’t influence the decision of the referee, and I don’t want to talk about the referee.

“When you’re not good enough at creating chances you can be punished.

“You have to give credit to Stoke, they defended well with resilience, they made the game very physical.

“They have the highest number of fouls in the Premier League, and we knew that before the game, but we didn’t cope well enough with it, and we were punished.”

With that result Arsenal have moved to third in the table, four points behind Chelsea and behind Liverpool on goal difference.