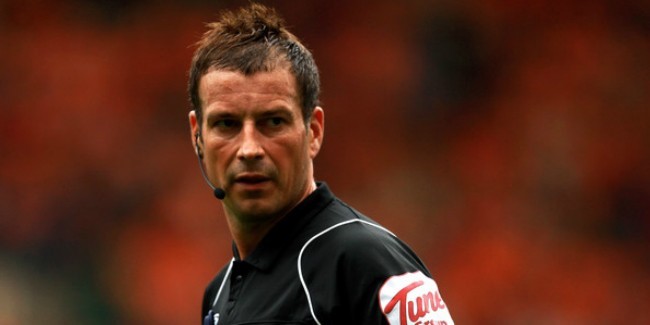 Another week of football passes by, another week Mark Clattenburg is left to satisfy himself by officiating subbuteo matches, or whatever it is referees do to remain sharp and authoritative, during an impromptu suspension.

Three long weeks have now passed since Chelsea made their initial complaint to the FA, in which they allege Clattenburg used inappropriate language of a racial nature towards John Obi Mikel.

In the meantime, while Clattenburg sits idle, parties of all different shapes and sizes have postured their given interest. Louise Taylor of the Guardian painted Clattenburg as a high flyer courting controversy. A man who’s manicured hair is only outdone by his flashy Porsche Boxster.

Alluding to the idea that he could easily be confused with the footballers that he is paid to control. I fail to see the connection between how he looks and behaves off the field with how he performs objectively on it. On a side note, I would question quite how flashy a Porsche Boxster is anyway.

Especially when compared relatively to the taste and spending capacity of a Premier League player. Would a player have the nerve to turn up to training in a Boxter? A Boxster? Really? I think not.

Elsewhere in the media –never one to miss an opportunity to stoke a rivals fire– Sir Alex Ferguson, bless him, has confessed that he is convinced Clattenburg to be innocent of all charges. No, Sir Alex is not privy to evidence to make such a matter of fact statement.

Instead he is relying on his gut – taking a page from Stephen Colbert – to pass judgement. He simply can not believe it. And, on this particular occasion, with no evidence to support either, I think Fergusons gut might well be right.

Over at Stamford Bridge, gastro-opinions aside, Chelsea maintain they have followed protocol by filing the complaint with the FA. Which I would supose is the bare minimum a club should do for a player if he is to make such a complaint. Chelsea believe that the FA should be the sole party presiding over the case.

Much to the annoyance of the Society of Black Lawyers, who accused Chelsea of having a “cosy agreement with the FA”, by failing to provide the Police with a victim in order for their to be a criminal investigation. Without a victim or evidence, the Met have dropped their inquiry.

Now, if the FA does find Clattenburg guilty –and I would be amazed personally if they did– but if we hypothesize that they did, then the first and obvious casualty would be Clattenburg who would surely have to be fired.

Though I believe he would be a loss to football, and given that I am a staunch supporter of referees in general (yes –even during those times I find myself screaming like a possessed idiot at the TV, as though I have suddenly discovered telepathy), I would still maintain that he would have to seek employment elsewhere. I’m intolerant of racism at the best of times, least of all when it comes from those in a position of power.

On the other hand, should the FA find Clattenburg not guilty, then where will that leave Mikel John Obi? Providing he is telling the truth, then the FA and Chelsea will have both failed him. Miserably. Especially the latter, who by failing to involve the Met in the first place, would have denied the opportunity of independent party.

And in such a scenario, if I were Mikel John Obi, and Chelsea were my employees, I would be putting in a transfer request immediately, if I were telling the truth.

If Mikel John Obi is not telling the truth, and that he had been telling porkies all along, then not only will footballers have dived to yet a new low, by proving they have no limits when it comes furthering their own selfish cause, but more importantly he will have failed other players who have been genuine victims of abuse. Players who might now think twice about making a complaint, for fear of a possible backlash.

Whatever the outcome of this case, whether it be Sir Alex’s gut feeling a wee bit of indigestion or the more serious possible implications for Mikel John Obi, rest assured there will be casualties and long term effects for English football as yet again it struggles to cope with racism.