Liverpool fans will be boosted by the news that Argentine defender, who is also one of their main summer transfer target, prefers a switch to Anfield, according to reports from Portugal newspaper A Bola.

The Reds have shown a long standing interest in Rojo, who has impressed so far in Brazil with his solid display at left-back. Through out the year, Portugal newspapers claimed that scouts of both Liverpool and Arsenal had watched him closely and were thought to be heavily impressed with what they saw.

As with the cases of many Latin American players owned by third party, Rojo also belongs to the same category. Benfica owns only 25% of the player’s economic rights. The Portuguese club are not willing to sell him at the moment, as they want any transfer to be done after the World Cup, because his market price could hike up after that.

Yesterday, we reported that North London club Tottenham Hotspur are also showing a keen interest in signing him, as new manager Mauricio Pochettino wants to bolster his defensive options in the summer. 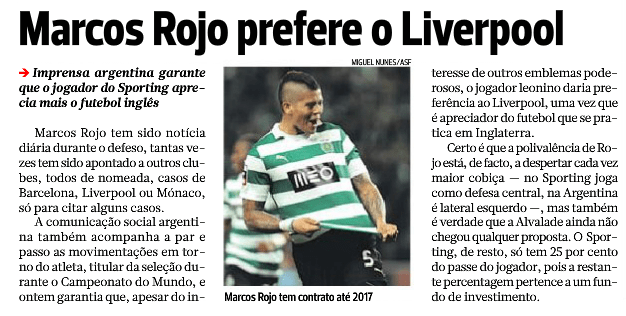 Liverpool were heavily linked with a move for Sevilla left-back Alberto Moreno but it seems like the deal has hit a snag, as the Reds harbours doubt over his market price. Therefore, the attention has been shifted towards Rojo, who can play as a centre-back as well.

A Bola reckons that Rojo personally prefers a switch to Anfield in the summer, so if Liverpool comes up with a good offer ( O Jogo recently published an article claiming, the Reds are are willing to pay more than €15m to secure his services), they might have a better chance in luring him than other suitors.