Deal close, Manchester United target all set to fly to England at ‘any moment’

With less two weeks to go before the transfer window shuts, pressure is mounting on Ed Woodward to make few signings.

Surgery is required and that too urgent. The question is whether the club is ready to shell out ridiculous money to get their preferred targets.

Yesterday reports emerged that Manchester United have made a break through yesterday over a £17.5 million deal for Sporting defender Marcos Rojo, where Nani could rejoin his former club on loan. 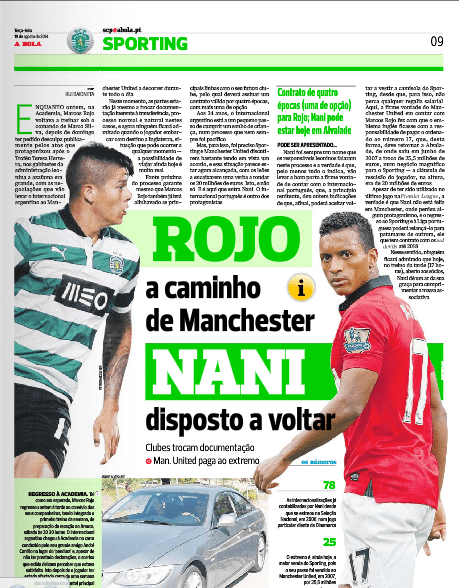 Talks between the two clubs were kept on hold, following a legal dispute between Sporting and Doyen Group, who owns 75% of his economic rights.

However, the stance was softened after Rojo issued a public apology for agitating for a transfer. According to The Times, United have agreed to finance the season-long loan of Nani as part of the deal.

Portugal newspaper A Bola have covered the story in details today. They claim that negotiations for Rojo are at an advanced and the player might travel to England at any moment, with fee agreed to be around €20m. On the other hand, Nani will return to Sporting (as part of the deal) on loan with United continuing to pay his wages. They stressed on the fact that the negotiations are on an advanced stage at the deal could be sorted at any moment.

The Argentine defender is primarily a left-back but can play in the central defence as well. United were left frustrated in their attempts to land Mats Hummels and Thomas Vermaelen, the later joined Barcelona.

Rojo is seen as a perfect candidate to fit into Louis van Gaal’s 3-4-1-2 formation. United may require one more central defender before the window shuts.