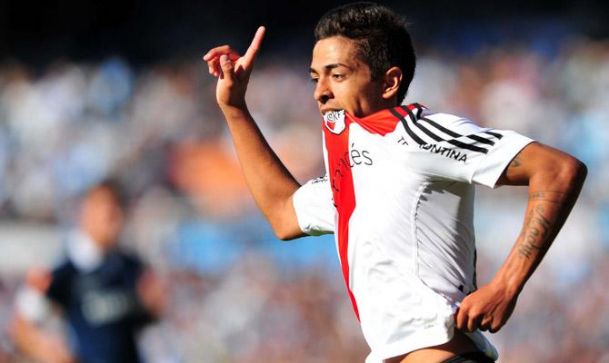 Argentina, is a nation that’s footballing tradition is synonymous with one position in particular.

The classic “Number 10”, or “Enganche” as its known in Spanish, is a position that carries a great significance amongst the Argentine “Hinchas”(*). It is a position of unique singularity, and critical importance, if not always from a tactical standpoint, certainly from an emotional standpoint in the eyes of the fans.

Lanzini, or “La Joya” (the jewel) as he is also known, follows in the footsteps of such greats of the game the likes of Enzo Francescoli, Pablo Aimar, Marcelo Gallardo or Ariel “El Burrito” Ortega.

It is precisely Ortega, who Lanzini replaced at halftime back in 2010 thus making his debut for “Los Milionarios”(*1) in a preseason friendly at a tender 17 years of age.

“La Joya” went on to have a strong preseason, so much so that the then River coach Angel Cappa, proceeded to start with Lanzini in the season opener versus Club Atlético Tigre.

However Lanzini would not set the world alight with his performance, and although he did see some considerable time throughout the competition, it was for “La Joya” a season blighted by injury & inconsistency.

Queue the end of the season and a shock relegation for River Plate. Unfortunately Lanzini had not been the star turn predicted by many (outshone in large part by an equally youthful Erik Lamela), he did however show a considerable amount of potential.

So much so that Brazilian Série A club Fluminese FC decided to take advantage of River’s difficult situation to swoop in and take the player on loan.

45 games and 5 goals later, Lanzini, though a championship winner, had yet to dispel the concerns around the irregularity in his performances. This, combined by an impossibly high fee (for South American football) of 15 million dollars demanded by “Los Millionarios”, meant an ensuing return for Lanzini to his boyhood club.

The Phoenix From The Flames:

The beginning of the 2012-13 season could not have started better for “La Joya”, who finally became the owner of the clubs prestigious Number 10 jersey.

However this would prove to be a highlight of what was in general a disappointing season. Under the then River coach Matias Almeyda, Lanzini’sparticipation in the team was sporadic at best. In fact it took Almeyda’s departure, and subsequent return to the club of legendary coach Ramon Diaz for Lanzini’s story to really to take off.

Ramon Diaz’s arrival proved a key component in Lanzini’s explosion to the top of the domestic game. And although under Diaz, River had a discrete first campaign, Lanzini’s progression throughout had been continuous. The culmination to a strong run of performances this season by “La Joya”, came with a goal and outstanding virtuoso performance in River’s historic victory over arch rivals CA Boca Juniors.

It is with this performance that Lanzini went some way to finally silencing the critics who believe him to be more a goal scoring midfielder, or second forward than a true classic Argentine “Number 10”. His inspired creativity, and tactical discipline playing behind a front two, and in such a high pressure occasion, was for many a coming of age for the young River Plate starlet, who proceeded to go on to achieve Championship success with River after a 5 year absence.

Europe On The Horizon:

In his playing style: fast running with the ball at pace, and eye for a goal arriving from midfield. Lanzini is the most natural successor that River have had to the great Pablo Aimar.

Therefore it is natural that “La Joya’s” notable performances have lead to a multitude of links with several top European clubs.

The most of recent of which being the “millionaires” of Kings Road Chelsea FC.

And whilst Lanzini’s fast paced, direct running style would suit Jose Mourinho’s charges, a far more suitable, and likely move would be to AS Roma FC of Italy.

Current Roma sporting director Walter Sabbatini is a known admirer of the young Argentine talent, and River & Roma retain a strong relationship from the multimillion transfer of Eirk Lamela. It would be no surprise to see Lanzini linking up with the “Giallorossi”(*2) in the not too distant future.

It is this writers opinion that “La Joya” would benefit most from a move to the Italian game (Torino FC being the latest team linked with the young star), more so at least than an initial move to the Premier League or La Liga.

There are still tactical elements to Lanzini’s game that require further development, and much like it did for fellow countryman Lamela and Javier “El Flaco” Pastore,a move to the Italian “Calcio” could prove invaluable to his overall game

Only time will tell, and an interesting summer surely lies ahead. The one thing that is certain, is that if Lanzini continues his current progression, Europe’s big clubs will be paying top dollar for the “Jewel” in River’s crown.

*1 = “Los Millionairios” – The Millionaires in English, is a nickname with which River Plate fans are known by.

*2 = “Giallorossi” The red and yellows in English,is a name by which AS Roma/fans are known by.