April 10, 2007. A date which which many Red Devils fans remember fondly, but one that to this day lives in infamy amongst Roma supporters. On that night, after beating United 2-1 at the Stadio Olimpico in the first leg, Roma confidently travelled to Old Trafford with the conviction that qualification to the CL semi-finals was within their reach. However, they did so without the knowledge that the only thing they were in for at the Theatre of Dreams, was a horrible nightmare.

Less than a year has passed since that memorable night, and once again the clubs from the Italian capital and the ‘Capital of the North’ will be meeting up again, this time in the group stage of the competition. And there are many people that are breathing an ‘air of revenge’ over on the Roma side…

“I would like to beat Manchester 7-0”. Those are the words of Roma captain Francesco Totti in a long interview to Spanish football magazine Don Balón. “My dream is to win the Champions League, it is the only title that I have never laid hands on. I am fully aware that as a Roma player it will be difficult, but I intend to succeed in my dream.” Totti added “I think that Barcelona is the prime candidate for the final victory this year, because they are able to field concurrently players such as Ronaldinho, Messi, Henry, and Eto’o”. For those that are interested, Totti also talks about the Scudetto, the Golden Ball, the Calciopoli match-fixing scandal in Italy, and does not exclude the possibility of his return to the Italian national team. 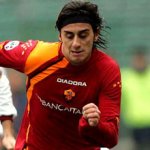 Meanwhile, someone that was absent from the 7-1 debacle of last year is Roma midfielder Alberto Aquilani, one of the Giallorossi players most in form in this season debut. This is what he declared to Gazzetta dello Sport: “We will be going into this game with the right spirit. It’s a very attractive match, one for which motivation will come by itself, no need to be over-charging oneself”. On the 1-4 defeat at the hands of Inter this week-end, Aquilani commented “The team was not transformed as a result of Saturday. Football is like that, sometimes things will go your way and sometimes they won’t. Rome is the same team as it was, with the same objectives. We are fully aware of our strengths and our desire for victory is very high”.

Impossible not to talk about the Manchester game: “I don’t like the words ‘payback’ or ‘revenge’. Last year’s match was an ugly defeat that put a big stain in Roma’s 2006-07 campaign. Now we’ll have the opportunity to prove that if we replay that game a 100 times, it will be impossible to concede 7 goals again. (…) Against Inter the penalty and the red card changed the match completely. Now we will be travelling to Manchester with the conviction that we can do well”.

One Roma player for which this game has a particular significance is midfielder Simone Perrotta, who spent the first six years of his life in Ashton-under-Lyme, a short distance from Manchester. The Italian player told uefa.com: “My father was a big fan of this club and came to watch matches at this stadium for more than 20 years. It was a great wish of his to see his son play here. Last year I couldn’t do that, tomorrow night I am delighted to be able to play here and to make him very happy as well.”

Indeed, Perrotta was carrying a 1-match suspension for that tragic night, but commented on the 1-7 defeat anyway: “It was a combination of a whole set of circumstances that went against us last time around. Tomorrow is a different match, with different players on each team – I imagine it will be a great match between two teams with an attacking approach. (…) We have to hope it will be different. It is a different match and it is not a question of us getting revenge – what we want to show more than anything else is there are not six goals between the teams. After the defeat last time, we said there weren’t six goals and destiny has given us the chance to show that.

So there you have it. With the exception of Totti and his 7-0 dreams (surely even he cannot be serious about that), the main expectations on the Roma side for this match seem to be along the lines of “we’ll go there to play a good match and forget this is the team that kicked our asses 7-1 lass time”. No talking about “revenge” or “retribution”, unlike surely what many of the Giallorossi supporters are wishing for. Even the team managers Luciano Spalletti and Sir Alex Ferguson seem to be going in that direction.

Such a shame that no one informed Cristiano Ronaldo on the seemingly common policy to be adopted. For reference, see the article from The Daily Mirror:

[The Portuguese midfielder], who terrorised the Italians with two goals and a hand in two others in April, revealed how one of Roma’s beleaguered men pleaded with him to stop his tricks. 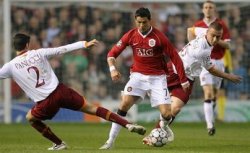 Ronaldo said: “When we were already winning 6-0 one of their players said ‘don’t do any more dribbles, you’re already winning by six’, almost begging. Obviously I won’t reveal his name, as these are comments brought about by occurrences in the game.

Ronaldo, who made the Roma revelations in his new book, Moments, will be singled out for special attention by Roma tonight, given the demolition job he performed last time.

Seems like The Times has little doubts on the identity of the Roma player in question, and tagged defender Christian Panucci (who’ll be out injured for today’s match) because of his accusations against Red Devil players to “abusing their superiority” during the match.

On the Panucci story, Ferguson responded in the Daily Mail:

So Manchester United fans, what do you all think about this? Will Roma be going for the jugular tonight, or will they inevitably break their teeth?

Marco writes on the mCalcio blog.